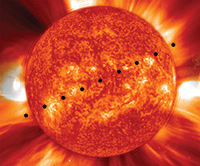 A Transit of Venus is a phenomenon that occurs when the Sun, the Earth and Venus are all aligned in the sky. It is a rare event, first observed by two friends, William Crabtree of Lower Broughton, Salford, and Jeremiah Horrocks of Much Hoole near Preston, in 1639. It is known these two gentlemen corresponded, sharing their observations and knowledge, but there is no evidence that they actually met. The last transit occurred on the 5th June 2012 and the next one is due in 2117. I know all this from the copious notes provided in the programme to this show, not because I have the slightest bit of knowledge about astronomy. So I did wonder whether I would find the subject matter of this play heavy going, but my fears were unfounded as it turned out to be a well-crafted tale of friendship and love, with a bit of science for good measure!

Writer Eric Northey uses real events to inspire his story but has Horrocks (Nathan Morris) arriving at the house of Crabtree (John McElhatton) and his daughter Jenny (Lucy Ward) to share findings. The two men come from very different backgrounds and beliefs which are explored through the piece, but a common love of science and the heavens and a keenness to share. We also see a very tender bond develop between the brilliant but hesitant and clumsy Horrocks, and the studious and loving Jenny. All this is set against the background of the increasing tensions that lead to the Civil War.

There are some very engaging performances here from all the cast, a nice script that brings out the warmth and humour of the Crabtrees and has some local references which were appreciated by the audience, and strong direction from Alyx Tole. I particularly enjoyed the portrayal of Jenny and Horrocks’ increasing closeness which was very well judged and tenderly done.

With its historical setting and original subject matter this play acted as a nice contrast to a lot of the 24:7 programme this year and was an unexpected treat. I even learnt a bit about history and the heavens (although I’ll have forgotten it by next week).
Posted by Alison at 15:33