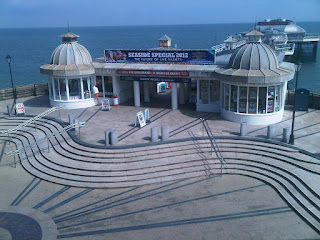 Oh I do like to be beside the seaside…… especially when it’s Cromer in Norfolk.

I have holidayed in Cromer many times, from childhood to the current day, and it really does typify the great British seaside town, it has an excellent prom (tiddly om pom pom), working fishing fleet, great beach with both long stretches of sand, and rock pools for the more adventurous child (I was a bit timid, used to let my brothers do most of the rock pooling – I had convinced myself those tiny crabs were killers!), and a brilliant pier with a theatre at the far end.  In fact, I think my first ever solo theatre trip was in Cromer when I went to see the kids show by clowns Coco and Rollo, went on stage and won a prize in the fishing game! 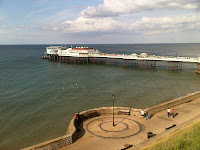 One tradition that Cromer Pavilion theatre has maintained over the years is a ‘proper’ end of the pier variety show. It has always stuck to a tried and tested formula – some singers, a dance troupe, a comedian or two, and maybe a couple of other ‘turns’, lots of toe tapping tunes, a few company sketches, solo spots and the end of act ‘big numbers’ involving the whole cast – delivering a show (well actually two shows that swap midweek) that will entertain a wide variety of ages. It’s easy to be cynical about traditional variety and assume its old fashioned and a bit cheesy, and it’s fair to say that over the years Cromer did have to occasional drop in quality – but to be honest with falling audiences as people holidayed abroad and a limited budget it is amazing that the end of the pier show survived intact. However, in the last couple of years the show seems to have been invigorated, without alienating their core audience. The dancers seem better quality, the singers excellent, the sets studier, the jokes funnier, and they have incorporated some unexpected acts into the mix, last year it was a bike stunt rider, and this year a hand balance artist, Karina Grigorieva.

This year’s singers have both appeared at Cromer before. Rob McVeigh (who some will remember as a former Joseph hopeful from the BBC Any Dream Will Do) has a nice voice, but I did feel he was fighting to be heard against the backing track at times. The other singer, Sophie Bloom, didn’t appear to have the same issues, either because hers was the stronger voice, or whoever was in charge of sound liked her better!

The host and main act was comedy magician Dain Cordean, who had a very good rapport with the audience. But the star of the show for me was Ben Langley, billed as a ‘physical comedy performer’. His background according to his bio is mainly working as a street performer / juggler in Covent Garden, but also with plentiful theatre experience,  and this showed in the way he was able to quickly engage the audience in his solo slot delivering a very funny and skilled juggling act, but also work well with the rest of the company, displaying good comic timing, great personality and he’s not half bad at the old singing and dancing either – a true variety performer!

The show we saw was show 2 – Galleria, which was loosely themed around a visit to an art gallery. Some connections to the theme, especially some song choices, were more tenuous than others, however the two numbers that the dancers did based on work by Gustav Klimt and Jack Vettriano were cleverly designed and choreographed and well performed.

Overall, the Seaside Special delivered an excellent variety show. True to its traditional values, suitable for the whole family from kids to grandparents, lots of enjoyable toe tapping and clap along tunes, and a company that worked well together to bring a holiday cheer to the audience whatever the weather (which in our case was mostly dry and hot whilst the rest of the country suffered record breaking rainfall).
Posted by Alison at 15:16