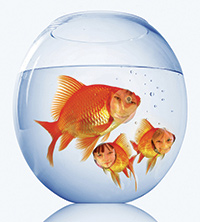 Show 2 today, after stroll in the warm summer weather (at last) back to New Century House was Goldfish, written by Lisa Whiteside, Directed by Darren R L Gordon and presented by Baby Giant Productions in association with Pure Management and Passion Academy.

This centred on the lives of three children in a problem estate, their interactions with each other, their youth worker Lou (Lisa Whiteside) and police officer Nick (Luke Walker).

It is an energetic and disturbing play with some excellent performances, especially those of the actors portraying the children who are at the core of the events. Leanne (Keeley Fitzgerald) is a chaotic and angry child, suffering abuse at home and emulating the inappropriate ‘grown up’ behaviour that she witnesses all too often. The actress does an excellent job of portraying the vulnerabilities of the eleven year old,  hidden behind the bullying and mouthy persona. Leanne attends the estate’s youth centre with Abby (Zoe Iqbal), a child with ADHD, living with a junkie mother, often having responsibility for her five siblings, and being farmed out by her father to her uncle a ‘reformed’ paedophile. This was an incredibly energetic performance, almost in constant motion, words tumbling out of her at an incredible pace and responding touchingly to even the slightest kindness. Cody (Ciaran Clancy) is the outsider, from a broken home, but going to a good school, wanting to be included and attend the centre and take part in their activities, but not being allowed because he is not classed as a ‘problem child’, which leads him to get in with the wrong crowd in order to protect himself and belong. Again, this was a great performance of a complex character.

The show was an interesting construction, not wholly linear, which confused me a little at the start, but allows an interesting reveal later in the play. It does have some touching comic elements, such as Abby’s delight that none of her siblings has to share a Dad. It also employs some clever scenes such as rapid switching of characters on stage to portray events in the home lives of the characters, there is a particularly impressive example of this when they are focussing on the conflicts and complexities of Cody’s life.

However, unlike Loaded, playing next door and focussing on a similar social group, there is no real glimmer of hope for any these characters, even the boy from the good side is dragged down by his circumstances, and with the sheer amount of issues that are addressed, including drugs, violence, child abuse, illness, funding cuts, neglect and rape, although you do have great sympathy and some affection for the characters, it does feel desperately bleak by the final scene. Powerful stuff, excellently staged and performed, but somewhat depressing!
Posted by Alison at 11:25