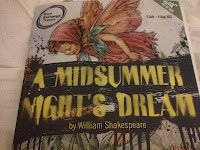 I was a little nervous heading off to see this production of Shakespeare’s A Midsummer Night’s Dream. Advertised with lovely pictures of flower fairies, I was expecting a fairly standard romantic production of this well-known classic, and had invited my parents along for a nice summer treat, but I suppose by now I should know to expect more from the Royal Exchange.

I had not noticed the small print on the marketing that referred to this as a ‘retelling’, and although I was aware that this production had originally been staged by Filter Theatre at the Lyric Hammersmith, and that reviews were good, in my usual way I’d avoided any more detail than that. However, a few days before we were due to visit, a ‘tweet’ from the Royal Exchange caught my interest, and I found myself on the theatre’s discussion board for the show watching a battle raging between those who had loved this production, and those that had detested it. Accusations were flying that it was a travesty, that it had altered the heart of the play, that it had messed with the Bard’s wonderful words, there was ‘disgusting’ language, it wasn’t suitable for kids, and there were tales of people walking out. Not that any of this really bothered me, I enjoy seeing a different take on a known text, I knew the reviews had been glowing, and I enjoy being challenged (although some theatre productions do seem to get the word ‘challenging’ mixed up with the words ‘self-indulgent’ and ‘obscure’ from time to time) but how would my ‘more mature’ guests take to all this modern stuff?

Well let’s just say a few quick sideways glances at my parents’ faces during this hilarious and anarchic production put paid to those fears. This was a wonderfully energetic and original reworking, with a large dose of slapstick thrown in for good measure. It cracked along at a lively pace, involved the audience in some unexpected and surprising ways and made me laugh from start to finish. If anything I wish I had seen it sooner in the run so that I could have gone back for a repeat dose.

Did it disrespect the original play? Not in my opinion, all the key elements of the play and much of the text were present and correct. The key characters were all there, but maybe not as you would ever have expected to see them realised. There were some additions to the text, most notably an extremely funny ‘stand up’ routine at the outset that set up the premise, and also set the tone for the piece. And the Mechanicals topped and tailed the play, rather than being buried in the middle. Was it ‘disgusting’ and unsuitable for kids, an emphatic no from me. I think there may have been a couple of mild swear words in there, hardly earth shattering, and there was a bit of very funny innuendo, that would have gone straight over the head of the younger element of the audience. But there was also madcap tomfoolery that appealed to any age.

I do think that knowledge of the play helped me appreciate some of the elements of the production better, but this production would be a good way of introducing someone who wasn’t familiar to his works, to Shakespeare. And at times the level of reverb used with some of the musical numbers did make words a little hard to distinguish, but overall this really was a refreshing reworking, and an excellent way for the Exchange to round off its season. In fact rather than rolling in his grave, I think if he had been alive today Will Shakespeare would have been rolling in the aisles, and proud that his work could inspire such creativity.

But I have to say, the real heroes of this production have to be the people responsible for resetting the mess and chaos left behind after each performance, especially on a two show day! If you saw it, I’m sure you’ll appreciate what I mean!
Posted by Alison at 15:28