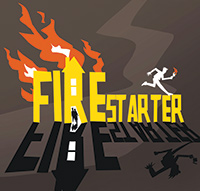 My second trip to the quirky Three Minute Theatre was today to see Firestarter by Dave Windass, directed by Andy Pearson and presented by Ensemble 52. It’s a play set in the early 1970’s in Northern England, inspired by real events, wanting to explore the mind of an arsonist, and delve into the dark recesses of the psychotic mind.

It starts promisingly, in Part One as we meet the mentally challenged adolescent Paul, and explore the workings of his mind that lead him to such terrible acts, the force that takes over him every time he feels the tingle in his fingers that can only be satisfied by flame. Through his absorbing monologue you also get a glimpse into abuse he has suffered, his rationale for his acts, and his attitude to his victims.  It’s a mesmerising performance by Andy Wilson as the disturbed and chilling Peter, and gives great promise for what will follow.

However, Part Two was where it went wrong for me. Here we are introduced to Annie and Tone, getting reacquainted following Tone’s lastest release from prison, somehow ignoring the bound and blindfolded Paul at the rear of the stage, who it eventually becomes clear has been caught by Tone in their house ready to start his latest fire. Neither of these characters really worked for me. Whilst Zoe Matthews gave a brave performance as Annie, her actions just didn’t seem believable, initially light hearted and brash, trying to seduce her man and satisfy her desires, and then only latterly showing any fear, or concern for her daughter asleep upstairs. I think the playwrights intention with Tone (Richard Vergette) to portray a complex psychotic character to make you question who is the real madman in the room, but it didn’t feel well realised or portrayed.

The plot seemed messy, like the playwright couldn’t decide what story he wanted to tell so he crashed a few clumsily together, resulting in an unconvincing whole. Such a disappointment after the promising start.
Posted by Alison at 10:07