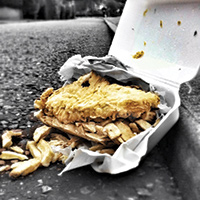 Today’s first 24:7 experience saw me in a ‘new to me’ venue, Three Minute Theatre in the Affleck’s Palace building. It’s a quirky little place with tons of character, although being in the heart of a bustling place with no real sound proofing does have its disadvantages if you are towards the rear of the audience seating area, especially when a child outside has a fifteen minute meltdown which was somewhat distracting. Also distracting was the toy clown staring at me from a shelf, I’ve never really trusted clowns, and this one had sunglasses on so it was clearly up to no good!

My Arms by James Leach, directed by Adam Quayle and presented by Talking Props Theatre in association with Box of Tricks, is a two hander between husband and wife Colin (Josh Morgan) and Helen (Roberta Kerr) where the action unfolds over four scenes told in reverse order. The structure is quite compelling, it is clear when we first meet them that they are estranged and dealing with the aftermath of something that has had devastating consequences, but it only gradually unfolds what that was and the impact that it has had on their lives, their relationship, and the lives of those around them.

The balance in their relationship has shifted too, at the start we see that Helen, whilst still caring for her husband, and therefore finding it hard to broach why she needs to talk to him, is now ready to break away and move on, whereas he appears to harbour a hope that now he has paid his debt and got his life back on track there is a way he can get back what he has lost. Yet in the earlier in time scenes we see how much Helen loves her husband and is desperate for him to express how he feels for her. It is really interesting to see how this balance shifts influenced by events and their fall out.

Both actors give excellently judged and compelling performances that feel very real, as their characters struggle to cope with their situations and emotions. Powerful stuff and an engaging construct. I’m tempted to see it again (hopefully without screaming child accompaniment, and I’m not sitting near the evil clown again!)