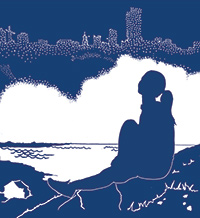 Stars are Fire was the opener for my festival experience this year. Written by Francesca Whaite, directed by Liz Postlethwaite and a Monkeywood presentation, it told the tale of Carly and her Dad Neil, who after his wife dies, decides to relocate them both from Manchester back to his roots in Northumberland for a ‘fresh start’.

Bit of a strange play for me to get my thoughts down on paper this one, as I found that it was only after the whole of the play that I truly appreciated that had come before, if that makes any sense? Both Carly and her father are suffering, and that manifests itself in anger and animosity towards each other as neither are initially capable of reaching out for the comfort they so desperately need. Into this mix, comes Neil’s cousin Lou, awkward and introverted. Lou lost his mother ten years before and reaches out in his own clumsy way to Carly, who also helps him to begin to move out of the safe ordered and limited world he has created to cope with his own loss.

Early on, the play has a lot of long uncomfortable silences between father and daughter, which were even more uncomfortable in the intimate setting of the Pioneer stage. Whilst excellently played by Emma Clarke as Carly and Steven Hillman as Neil, I initially wasn’t sure about these scenes, especially as what has caused this silent war isn’t really obvious at the start, but in the context of the play as a whole they were really quite affecting and realistic. Richie Gibson’s portrayal of the awkward Lou was good, wanting to reach out, but not really knowing how to connect with Carly.

The ending was nicely done, not everything is neatly resolved, which would have been unrealistic, but you have hope that all three characters have started on the journey of healing.

There are minor elements of the pacing of the play that I felt could have been tightened up, but some of this may have been because it was the first performance, I did notice it seemed to overrun a little and therefore have the disadvantage of noise from the audience in the other stage leaving and milling around outside. There are also quite a lot of scene changes in the earlier stages of the play achieved through moving the minimal stage props. Whilst they were effective, and well complimented by the music, if there was a way of reducing the length of these somehow I think it would benefit  the piece, as there is a danger of losing the audience’s attention and the tension of the earlier stages.

All in all though, a tender and thought provoking opener to ‘my’ 24:7 experience.
Posted by Alison at 15:45