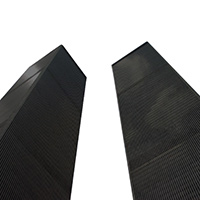 As well as the ten main plays that 24:7 is hosting this year, there are a number of ‘extras’ including rehearsed readings, talks by writers and actors, and a couple of ‘by special invitation’ productions. Sadly my schedule would not allow me to fit everything in, but I did manage one rehearsed reading, a bit of street theatre, and today’s invited play, Towers ofBabel.

Written by first time playwright and University of Bolton creative writing student, (and established tiler and plasterer!), Nick Yardley, and directed by Bolton Octagon’s David Thacker, this play was chosen to win the Octagon Theatre award, which gave the chance for it to be developed further and produced. It is set in New York, in a radio station broadcasting in the shadow of the Twin Towers on the morning of the 9/11 terrorist attacks.

Topping and tailing the play is a touching speech given by Vince, a Jewish lawyer from Manchester, on the day of his ‘second bar mitzvah’, describing his experiences of 9/11. However, the main part of the play sees Vince arriving in New York to visit his brother upstate for Jewish New Year, but on the way stopping to visit his son Justin (Ted Holden), an economist who has a spot on the radio station’s morning talk show. The show is hosted by Bill (Eamonn Riley) and the antagonistic Baldy (Colin Connor), who looks for every opportunity to bait his guests and callers. His ‘shock jock’ tactics are in the main encouraged by producer Issy (Georgina Strawson) as it is good for ratings and pleases the management. Justin has hidden his relationship with the non-Jewish Issy from his father, knowing he we disapprove, and the play centres Vinny’s off mike confrontation with his son, and on mike confrontations with Baldy, over the nature of relationship, faith and belonging.

It is an extremely accomplished piece of writing, especially considering Yardley is a first timer. The cast are excellent, especially Kenneth Alan Taylor, who portrayed Vince’s journey well as he explores the nature of his faith, and the ‘differences’ between us. The timing of the setting adds tension to the play, we know what happened that morning, and each time the studio cuts to the ‘eye in the sky’ traffic reporter, you wonder if this will be the moment, although at times the ‘playing’ with the audience in these moments did, for me, threaten to distract from the main themes of the piece.

The final moral of the play is very powerful and touchingly played, tying in well to what has gone before. A very satisfying addition to my 24:7 schedule and I’m glad I managed to shoehorn it in!
Posted by Alison at 04:16