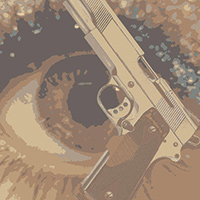 Show 2 in my 24:7 marathon was Loaded, written by Jo Kirtley Pritchard, directed by Martin Jameson and presented by Working Progress Theatre Company. I follow Jo on twitter, so it has been really interesting seeing the progress of this play from excited tweet to say her play had been accepted, through development, rewrites, rehearsals and now seeing it ‘in the flesh’ as it were.

It tells the story of feisty Manchester teen Chantelle, excluded from her school and referred to an education unit as her ‘last chance’, her funny but tough as nails youth worker Ella, Dylan her gang member boyfriend, and her stepdad Larry.

This is an energetic and well-staged play, with some excellent performances from its cast. Dolly Rose Campbell as Chantelle gave a ‘glittering’ portrayal of a very complex character. She was in turns challenging, funny and heartbreaking and there was a real natural energy in her performance. Helen Macfarlane, as youth worker Ella was another nicely judged performance, showing the necessarily spiky side of her character along with great humour and a genuine affection for Chantelle’s welfare, ultimately leading to dramatic results.

Rob Ward, as Dylan was very believable, portraying a tough gang member, in love with Chantelle, and trying to create his version of a great future for them. Darren Connolly as stepdad Larry gave a well-judged performance, his earlier behaviour giving no clue to later turns of events, making them all the more powerful.

The staging of the play was great, very slick scene changes with one cleverly being merged into the next keeping up the pace of the piece, with excellent music complementing the mood and energy of the performance.

I was a bit confused (and slightly angry!) regarding some of the audience member’s amused reactions to two particularly powerful scenes that I thought were excellently portrayed and very unsettling. I found those scenes strong and affecting, and not for the faint hearted.

If I had one slight quibble I did feel that the play would have benefited from being longer as the unfolding complexities of Chantelle’s relationship with her stepdad felt a little rushed and could have been explored further.

Jo has worked with the kind of kids she writes about, and it shows, the subjects are treated with respect, warmth and realism. It really makes you challenge your own thoughts and prejudices about the type of people she is portraying. This is the first play she has had professionally produced, and I don’t think on this evidence it will be the last.