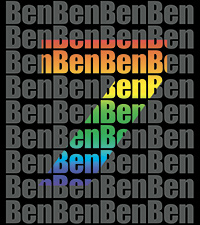 All The Bens, written by Ian Townsend, and directed by Martha Simon is a play that I had been hearing very good vibes about, although having read the interesting blog that they have been keeping, I have been studiously avoiding any reviews in case they spoilt elements of the show for me. There are just three characters in this piece, and it is told simply in a series of interactions between the characters, and direct addressing of the audience. This works very well and really engages the audience from the outset.

Ben (Dominic Vulliamy) is the central character around whom the piece unfolds. He's slightly aimless in life, looking for something , love, companionship or just meaning. He meets the intense Al (Thomas McGarva), and wonders whether he is the something.  But Al claims not to be interested, he’s not gay, he was just using him as a diversion. And then there is Ben’s half-brother Henry ( Daniel McCann), special needs, obsessed with numbers, but the most endearingly honest and uncomplicated character who has a knack of cutting through all the angst and denial and barriers that we surround ourselves with and finding the real truth.
The three characters have a series of encounters, and gradually a connection of sorts starts to develop between them, but not everything is straightforward, and some serious themes are touched on during the course of events.

The three actors give fantastic performances, really bringing out the subtleties of their characters, but special mention has to go to Daniel McCann who was outstanding in the role of the endearingly honest but vulnerable Henry, a technically superb and wonderfully judged portrayal.

I’ve found it quite hard to articulate my thoughts about this play because I want to do it justice and  I can’t really explain what it is that made it so special for me. There is something about it that reaches right into you and tugs at your heartstrings.

Beautifully written, nicely observed comedy is balanced with more serious themes,
including one  scene that is quite hard to watch. It is excellently directed, boasts an extremely talented cast and was definitely one of my highlights of this year’s festival. I do think it has something that speaks to us all about life, and what we all need from it. It left me quite emotional and in desperate need of a hug, but hopeful too that there is a way through all this for us all if we are brave enough to embrace it.
Posted by Alison at 15:46