24:7 The Legend of the Ghost Shark 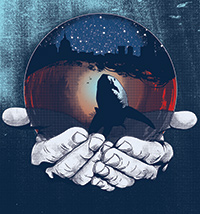 Having paid little attention to the various 24:7 play synopsis descriptions, I turned up The Legend of the Ghost Shark, written by Anthony Morgan, Directed by Charlie Mortimer and presented by UltramarineProductions, expecting to see some form of creepy ghost story. I was almost late for the show, having realised that my watch was five minutes slow just in time, and it was only as I settled hot and bothered into my seat, that I glimpsed the words ‘a surreal comedy’ on the front of the playbill, raising my hopes for some much needed light relief. This it definitely delivered on.

It’s a little hard to describe, as it is quite mad, in a nice way. Writer Jason (Christopher Brett), behind on his deadlines for his tedious day job writing copy for food and lifestyle magazines, has somehow conjured up and is taking dictation from an imaginary scantily clad narrator, Wendy (Iona Thonger), who is recounting the Legend of the title. Everyone can see Wendy and her presence in Jason’s room is treated as quite normal. Jason’s frustrated editor, Jacqueline (Alison Darling) is desperate for him to focus on his real work, and stop with the fanciful storytelling. His extremely patient doctor wife Catherine (Victoria Brazier) wants him to drink less coffee and spend some quality time with her.

It turns out that Jason has made a deal with the dapper Shaman, Lucien (James Nickerson), from ‘downstairs’ to write the Legend, which will allow a demon to be released. Add in to the mix Cops Conway (Tony De Angelis) and ‘Bad Cop’ Morello (James Kerr), and the stage is set for a surreal, fun and original slice of bonkersness.

All the cast gave sharp performances full of energy and wit, and the script had some great comedy lines, and engaging characters.

There are some elements that could be sharpened up in further development, but overall it was a refreshing and bright hour of surreal comedy, and was just what I needed to lighten my mood.
Posted by Alison at 10:52

Email ThisBlogThis!Share to TwitterShare to FacebookShare to Pinterest
Labels: 24:7 theatre festival, 247, Legend of the Ghost Shark