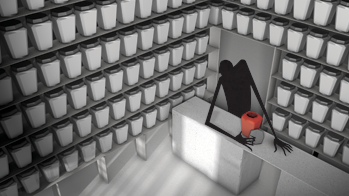 There once was a land where rhyming was banned
If spoken or even a whisper
And if you were caught you'd soon understand
Why the bogeyman's called The TongueTwister!
But in walks a boy who rhymes all the time, forever speaking in verse
To rhyme is sublime and should not be a crime
His tongue is surely a curse......

Sadly, I can't claim credit for the above words, they act as an introduction to this fun and inventive 'kids' show at this years 24:7 theatre festival. Written by Luke Walker I really enjoyed this clever play which looks at what happens when someone comes along to challenge the accepted order of things. Excellent performances, especially from the lively central cast of Josie Cerise (Jemima), Jack Dearsley (Plug) and Remmel Dawodu (Klymer), combined with an interesting concept and very clever language made for a pacey and involving play. Things did get quite dark when the concept of The Tongue Twister was first introduced, and I noticed a few of the smaller audience members cling tighter to their companions at that stage, but there is plenty of comedy and light moments to balance things out.

I personally thought maybe the plot got a teeny bit muddy at one stage in the second half, and some of the words used may be complex for the really young visitor, but the pace, rhythm and stonking performances had all audience members, young and not so young, engaged throughout.

The team also dealt excellently with a mid show fire alarm evacuation, Miss Primer (Ruth Evans) even making a cheeky little ad lib about it when we reconvened earning her a round of applause.

So, though I'm not clever enough to create a rhyming blog, I will leave you with this effort....

An absolute ball was has by all at the lively and engaging Tongue Twister
Tell your friends, to get there before it ends, in a big loud shout not a whisper!
Posted by Alison at 12:30