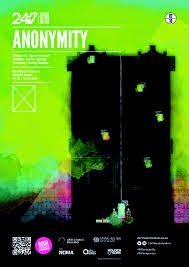 Two workers, Brendan (Gareth George) and Al (Joe Bateman) start work in the basement of a building. Their instructions are precise but mysterious, there are strict rules that must not be broken, and both seem afraid of the consequences of failure to follow the rules and step over the lines, real or imaginary. This play, written by one of the performers, Gareth George, examines themes of trust, fear, deception and misdirection of each other and the audience.

This is a play where nothing much actually happens, there is little narrative, a lot of it makes no sense whatsoever, it has a slightly unsatisfying ending and a lack of any explanation of circumstances or characters. This is just the type of writing that usually drives me mad. It often indicates a lack of respect for an audience and a writer who wants to show off. But somehow here, despite a long week of theatre going, and possibly an increasingly short attention span, I really enjoyed it and was gripped for the majority of it!

I think it was probably down to the quality of the performances from George and Bateman, together with an interesting script, a simple but effective staging, and excellent sound that combined to great effect to build a sense of menace and intrigue. The character of Brendan in particular was fascinating, often inconsistent, possibly hiding something, possibly behind this whole strange situation. Al was a more 'straight up' kind of guy, wanting to get the job done but clearly in great fear of the consequences of not delivering to the brief.

It wasn't perfect, I think there was probably one character that was surplus to requirements, and that strangely unsatisfying ending, but I personally was completely absorbed, enjoyed it, it made me think and stayed with me long after I left the venue.