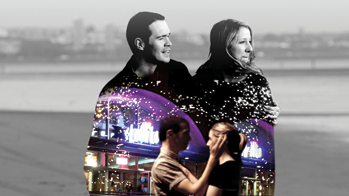 Afterglow, written by Julie Burrow, who also takes on acting duties as Her, alongside John Weaver as Him, documents the lifecycle of a relationship between from initial meeting, through blossoming relationship to uncomfortable and painful demise.

The play has an interesting structure, blurring the line between the characters inner thoughts and spoken words, the said and the unsaid. The script also explores words and their meanings and intents in and clever way and makes you think about language and how we use it.

The piece is very intimate, and quite intense and uncomfortable towards the end, you can see the breakdown coming, and the many chances that there may have been to make a difference, but you are completely absorbed as you witness the ultimate excruciating inevitability of events that unfold.

There are hints of a bigger story in the background of Her that have colour her actions, which could lead her to press the self destruct button on any relationship, but these never have a chance to be fully explored the one hour running time.
Great performances are given by the two actors, subtle, realistic and convincing,  and clever use of a compact set to depict the various locations which allows for smooth progression of events.

A completely absorbing and intimate play well told.
Posted by Alison at 15:03