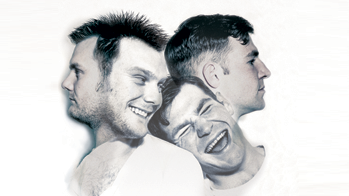 Mike (Sam Thompson) always looked out for his younger brother Mark (Sam Moran) whilst they were growing up, even when their own parents failed them and Auntie Pat (Judy Holt) and Uncle Sean (Richard Sails) had to step into the breach. But now as they gather for Mark's funeral, along with his grieving fiancé Philippa (Kate Levelle), mark is strangely unmoved, and refusing to even carry his brother's coffin.

This play by Ric Brady and Stephen M Hornby told through a series of scenes that combine flashbacks of the brothers' history, with the tension of the night before the funeral, explores why two once close brothers became estranged and delves into Mike's complex feelings about his brother.

This is a moving play, with very strong subject matter, and some very touching scenes. I enjoyed the structure as you got glimpses of the brothers' relationship through the years and gradually understood what had led to this situation. However, some of what I felt should have been the strongest pivotal scenes, seemed to lack impact in their delivery, which was a shame. There were also an awful lot of 'issues' hinted at, including the illness of Sean, the depression of the boys' mother, Mark's sexuality and his fiancé's drug abuse, which were never explored and felt a bit surplus to requirements.

The final scene, despite a very strange directorial decision which lead to a third of the audience possibly not even noticing two actors were on stage, was extremely powerful and moving and well played by Sam Moran and brought a satisfying conclusion to the show. However, for me the play, whilst it had many good elements and performances, needs further development to deliver the impact that its subject matter promises.
Posted by Alison at 14:56