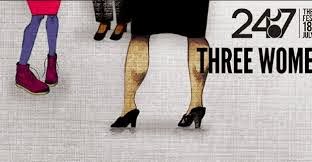 I try not to put too many spoilers in my blog entries, but it's quite hard to talk about Three Women without revealing the event that has led to the situation we witness in this play by Mari Lloyd. As I saw this on the last festival day though I think I'm pretty safe!

Three generations of the same family gather on the morning of a funeral, that of daughter Ellie's child, a concealed pregnancy stillborn at 22 weeks. Ellie (Lily Shepherd) has not yet come to terms with, or even fully processed, what has happened, Mum Lorraine (Jackie Jones) has arranged everything trying to put right events of the past when she herself lost a child and sank into depression, Nan (Annie Edwards) just wants her family to get through this but doesn't know the right way to support both mother and daughter.

This is pretty emotional subject matter and the play tries to deal with a lot in the short running time. It's an interesting situation to explore with complex feelings to portray and I feel it probably needed a bit more time to develop the characters fully. It's also told in real time, and as such the emotional journeys each of the characters take in such a small time frame seem a little unrealistic.

Despite that there are moments of really touching emotion and realistic interaction portrayed by the cast, and a very impressive set has been created by designer Emily Adamson. All in all I felt it was an interesting concept and something that with a bit of further development could have a life beyond the festival.
Posted by Alison at 15:28