The Book of Mormon, Prince of Wales Theatre London 1/4/16 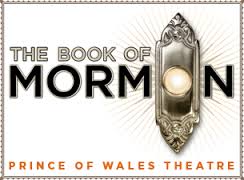 Despite ticket prices being eye wateringly expensive, I enjoyed this show immensely and would gladly see it again. Trey Parker and Matt Stone of South Park fame, and Robert Lopez (Wicked) collaborated on this irreverent, incredibly rude, witty, edgy but overall laugh out loud hilarious musical. This is definitely not one for the kids! 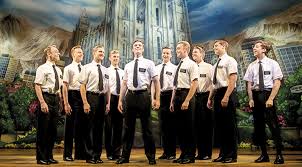 The smart all American boy Elder Price, top of his class at Mormon School, idol to the other disciples, is paired up on his first missionary post with the very enthusiastic but rough around the edges Elder Cunningham, who has never had a real friend and has a tendency to ‘make stuff up’. Rather than a posting to Orlando, as Price dreams of, they are to be posted to Africa to spread the Mormon word and convert the locals. However, the locals are less than receptive to their idealistic teachings, having other things to consume their time such as Aids, evil warlords and poverty. Let’s just say their jolly welcome song ‘Hasa Diya Eebowi’ definitely doesn’t mean ‘no worries for the rest of your life’ (Google it!). Elder Price’s fall from grace is brutal and quite spectacular, and things only start to look up when the ebullient Cunningham starts to ‘make things up’ again.

As well as the sharp writing, the costume and design of this show deserves heavy praise, never better illustrated than in the number ‘Mormon Hell Dream’ , an exuberant barnstormer of a number that is represented by heaven, hell and everything in between, even the odd  Jedi!

The cast are brilliant, they work so hard and their timing and individual performances are perfect. 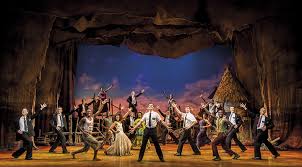 The show is so edgy and irreverent that I wonder how it ever got greenlighted in America, a nation not always known for its open mindedness especially when it comes to religion, but I’m very glad it did because I don’t think I stopped laughing (and occasionally gasping!) all the way through. In a nice touch the Mormons themselves have actually taken out advertising space in the programme, kudos to them.

All in all this really was one of the best and funniest shows I have ever seen, not for the faint hearted or the young, but the rest of us can have a ball (you may however have to sell a kidney to afford a good seat)
Posted by Alison at 07:53