2016 Round Up Part Four - September to December

A Streetcar Named Desire at the Royal Exchange was another star vehicle for Maxine Peake in her portrayal of the complex but fragile Blanche Dubois on a very minimalist set. I wrote about it here.

Later in the month I had to go down to London for a work trip so extended the stay by a night so I could shoehorn in some theatre. On the Friday on a whim I decided to go and see Charlie and the Chocolate Factory before it closed. Not my normal type of thing for a solo visit, but I did enjoy it and my hearing has just about recovered from the over amplification. I wrote a post about it here.

Then the next day, I was walking past the Theatre Royal and noticed that they did tours. They were very cheap; I think it was about £10, and excellent value. An actor took us round many areas of the theatre, gave us loads of history, folklore and backstage secrets – a fascinating and thoroughly enjoyable hour.

Before I travelled home that day I managed to fit in a second visit to The Play That Goes Wrong at the Duchess Theatre. I saw this in 2015 originally, just before it won all its awards and before Mischief theatre embarked on their world domination plan (currently three shows in the west end, one on Broadway, one due to tour next year and Christmas shows on Radio 2 and BBC1!) It was just as funny second tie round with a different cast, even knowing what disasters were about to befall the ‘amateur production’.


I don’t appear to have gone to the theatre in October – how unexpected!

Another trip to Hope Mill Theatre in November to see writer / performer Laura Lindsay’s latest work Parallel.  Superb three hander that I discussed in full here. I Would have loved to have seen that show more than once.

I also experienced an excellent work in central Manchester that was put on in conjunction with the Contact Theatre, Lookout. Such an interesting and thought provoking concept that is hard to describe but I had a go here.

Breaking the Code at the Royal Exchange theatre was seen that same afternoon. Focussing on elements of the life of Professor Alan Turing this was an interesting show. Daniel Rigby was excellent in the role of Alan, with a strong supporting cast. The set was very inventive and worked well to keep the pace engaging. The narrative was structured as a number of snapshots of Turing’s life; his introduction to Bletchley, his relationship with his mother and colleagues, elements of his post Bletchley life and the impact of his death on his mother. But each just felt like a fleeting glimpse and I longed for it to explore one or more of the themes in more depth.

Finally in November a new play from two first time playwrights Jackie Thompson and Anna Wood, Fallout, at the Anthony Burgess Foundation. This was an interesting, moving, funny but at times unsettling play about the relationships between a group of women who have gathered for the hen night of one of them. The first half covers a drunken night of partying, revelations and resentments, the second half deals with the fallout from the night before, and then a threat of a very different kind that draws them all together. It was a really strong cast and an interesting premise, which had been devised and delivered by an all Northern, all female cast, crew and creative team. 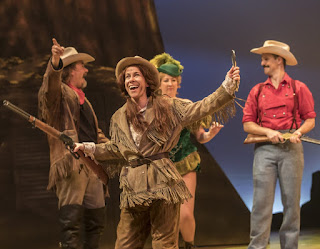 I rounded off the year with a trip over to Sheffield to see this year’s offering at the Crucible, Annie Get Your Gun.  Sheffield always put on a great Christmas musical and this year was no exception. The fantastic sets, wonderful music and talented, hard working cast combined to deliver a barnstormer of a show telling the tale of sharp shooter Annie Oakley’s rise to stardom and her rivalry and romance with showman Frank Butler. It’s one of those musicals that, even if you’ve never seen it, like me, you know most of the songs. Anna Jane Casey was wonderful in the role of the gunslinger Annie, playing nicely off the somewhat pompous Frank (Ben Lewis). A true festive treat that rounded off my theatre year nicely.
Posted by Alison at 06:00