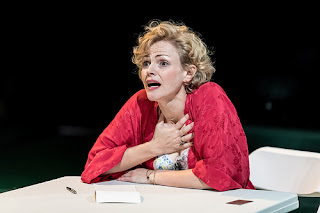 The latest production with the Exchange’s Associate Artist Maxine Peake was Tennessee Williams classic play. Teaming up once again with Director Sarah Frankcom this was quite an edgy retelling. A pared back set consisting of just a table, two mattresses and a bathtub separated by a perspex screen, was actually very effective, allowing you to focus on the characters fully and somehow adding to the tension. Whilst the whole cast was excellent, this was Peake’s play. Her portrayal of Blanche Dubois walked the lines between fluttering fragility, steely determination, manipulation and madness with a skill that kept you gripped throughout.

There was one directorial choice that I don’t think worked towards the end of the second act, an overly extended section before the final scene where the cast came on in overalls and vacuumed and tidied the stage felt contrived and I’m not sure what point was trying to be made. To me, it broke the mood of the piece and detracted from the final scene. But other than that this was a masterclass in how fantastic performances don’t need to rely on sets and can embrace more imaginative casting to outstanding effect.