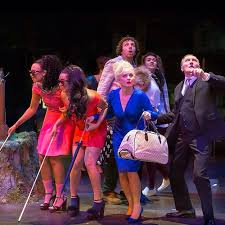 My year started with a trip to the Royal Exchange in Manchester to see my favourite musical, Sondheim’s Into The Woods.  Unfortunately, the actress playing the central character of the Witch, Gillian Bevan, had been struck down with the lurgy, and the Exchange does not use understudies. Stepping in at the last minute, with extremely limited chance for rehearsal, the actress playing Milkywhite, Rachel Goodwin, performed the role ‘script in hand’ and she was amazing. The production was superb and she got a well deserved standing ovation. Bevan was not able to return to the production and the part ended up being recast for the remaining run, but I think it was a pity the Exchange were not able to retain Goodwin in the role – I would have gladly seen her again.


The amazing Wit, at the Royal Exchange made me laugh and weep. I did write this one up. An absolute triumph for Julie Hesmondhalgh and one of the best things I saw all year. 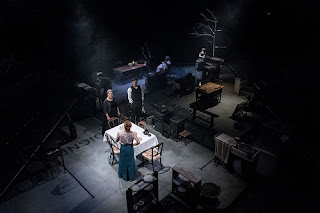 Husbands and Sons at the Exchange I’m sure deserved a blog but didn’t get one. It was great to see Ann Marie Duff on stage, and Louise Brealey gave a striking performance.  I remember a great set, interesting contrasts of the social levels, and slightly distracting ‘opening door and putting on coat’ miming, which became less distracting as the performance developed. But I’m afraid any other detail of my impressions is lost in my awful memory. 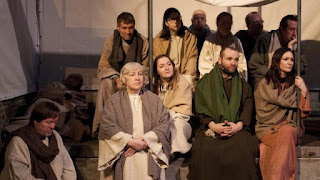 I was also involved in a production myself in March, as a costume assistant for a few days on a production of The Passion that was staged at Upper Campfield Market. The performance was collaboration between StreetwiseOpera, a charity that works with people who have experienced homelessness, TheSixteen, a highly respected group of classical musicians and Home. I got the opportunity to be involved via a friend, Brian D Hanlon, who was the Costume Supervisor for the production, and it was such an interesting and memorable experience and privilege to be part of. Full professional values were being brought to the production, and one night was being filmed to be broadcast on BBC4. The production team had to battle with the elements and a very dilapidated venue that threatened to flood on more than one occasion. The performance itself was extremely moving; the two sets of performers worked truly as one team and had been doing throughout the preparation for it. The Streetwise cast were some of the kindest people I have ever had the pleasure of working with and I am so grateful for the opportunity to be involved.