The Mighty Walzer at the Royal Exchange was a fun adaptation of Howard Jacobson’s novel about growing up in the Jewish community in Manchester in the 1950s that billed itself as a ‘riotous tale of growing up, sex and ping pong’. There were some lovely performances in this production, especially from Elliot Levey as Oliver Walzer and Tracy-Ann Oberman as Sadie Walzer.


August proved a bumper month, mainly because I used my birthday as an excuse for a few treats which started with a trip to London for a whole weekend of theatre shenanigans. 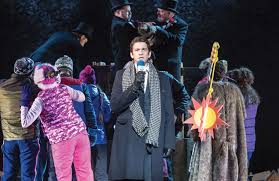 First up was the new Tim Minchin musical, Groundhog Day at the Old Vic which I loved! I really wished I’d written up my thoughts about this at the time (actually I did but I can’t find them so a longer blog may follow one day!) I wondered how they would adapt the film for stage, if anything they made it better. The story is the same, albeit darker at times when weatherman Phil Connors realises his predicament and goes from confusion, to exploitation, despair and finally acceptance and learning. The writing is as clever as you would expect from Minchin, and the cast worked so well together with such clever choreography to portray the repetition. The staging and set were excellent, there was some very impressive sleight of hand, and what appeared to be one of the most complex revolves I’ve ever seen (I was below stage level, but people seemed to be going in all kinds of directions!)

Andy Karl in the lead role as Phil was charismatic and hilarious; the whole cast so hard working and tightly rehearsed. I saw it at preview and had a minor quibble about the sound balance as the words were a bit drowned out in some of the livelier numbers, and Minchin’s lyrics should never be drowned out, but I’m sure they would have sorted that for opening. I’d really love to see it again so here’s hoping it returns to the UK again.

Next on the London list was a 'booked on the day at half price' visit to see Hobson’s Choice at the Vaudeville. The lead actor Martin Shaw was indisposed, but his part was more than adequately taken by John Vernon. This was a funny, unchallenging play and I particularly enjoyed Bryan Dick as Willie Mossop. 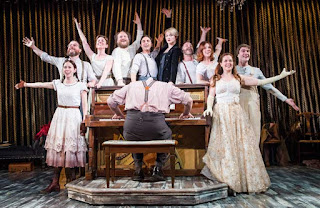 Next up to round off the trip a Sunday matinee to the Menier Chocolate Factory to see the Fiasco Theatre production of Into The Woods which had come over from New York. The Menier is a very intimate space and this production suited it perfectly. It was a perfectly pared back production, the set was like the backstage area at a theatre, or an attic, and the small cast of ten brought the story to life, including providing all the music, quite magically and inventively. Of all the versions of Into The Woods that I have seen this was the funniest, most moving and delightful and the cast were so talented and totally broke down the wall between performers and audience. Very special indeed.

Away from London, the last of my birthday excuse trips was over to Sheffield to see Magneto and Xavier (ok McKellen and Stewart) do Pinter in No Man’s Land at the Lyceum. I wrote it up here. I did enjoy this masterclass in acting, but I’m afraid I hadn’t a clue what was going on at times. Maybe you have to be a certain type of educated person to ‘get’ Pinter!