The Ones That Got Away - Part One


Life's been a busy old creature with one thing and another in 2013, and although it was always my intention to blog everything I saw at the theatre, inevitably some slipped through the net. So I thought I would do a quick whistle stop, and not exhaustive, round up of some of the things I saw in 2013 that never made it as far as a 'proper' blog entry!  When I came to do it I was ashamed to see how many had not been written up so it has turned into a three part catch up!

The Accrington Pals, Royal Exchange Theatre - This play viewed the experience of World War One primarily through the eyes of the women that were left behind when a large contingent of the town went off to fight. Atmospheric, rain soaked set and a tense feeling of inevitability as we, the audience, knew few would come back.

To Kill A Mockingbird, Royal Exchange Theatre - wonderful set and design cleverly transforming before our eyes to evoke the various settings.  An excellent cast, especially the central character of Scout (Shannon Tarbet) and an accomplished production of this tense and at times challenging story. 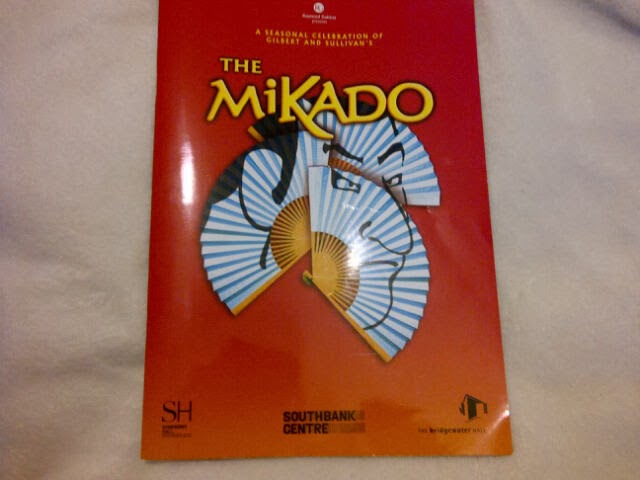 The Mikado, Bridgewater Hall - semi staged performance of the Gilbert and Sullivan Classic. Excellent cast that had a lot of fun with the performance, and an extremely funny and as I remember somewhat risqué update of ' I've got a little list'

The Ladykillers, Lowry Theatre- very funny stage version of the Ealing Classic with a wonderful cast, and a very clever multilevel stage design allowing for the performance to progress at pace with no set changes despite the multiple locations.

Relatively Speaking by Alan Ayckbourn, Wyndhams Theatre, London - Formulaic but funny farce of mistaken identity starring Felicity Kendall who basically played Felicity Kendall. The biggest surprise was the talented Kara Tointon, who I had only heard of as a television actress in Eastenders, but who more than proved herself to be a talented and clever stage actress in this play. Unchallenging, but funny and a good night out.

Noises Off by Michael Frayn, Lowry Theatre - touring production of this fast paced and increasingly chaotic comedy from The Old Vic. Actually the second time I have seen this play, first time was years ago with Jeff Rawle playing the role of the Director - this time it was his old Drop The Dead Donkey colleague Neil Pearson. Very funny indeed.
Posted by Alison at 07:58