That Day We Sang by Victoria Wood was originally presented as part of the 2011 Manchester International Festival at the Palace Theatre. As a volunteer at that festival I was lucky enough to get preview tickets for the show, but, as is often the case with my festival volunteering, I was enjoying working on one of the other shows so much I donated my tickets to my parents! I'm afraid Victoria Wood was passed over as I was too busy helping Doctor Who and hordes of excited children (and adults!) save the world! When I saw it was to be restaged two years later as part of the Exchange's season I was excited to finally get to see what my parents had been raving about.
This is an absolutely lovely musical play. It is packed full off all the clever, funny and touching lyrics and words that we have come to expect of the wonderful Ms Wood. 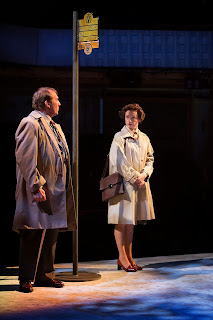 Set in both 1969 and 1929 it centres on the story of two former members of the Manchester Schools Children's Choir, Tubby Baker (Dean Andrews) and Enid Sutcliffe ( Anna Francolini ) who meet again as a result of a documentary that is being produced on the 40th anniversary of the choir's recording of Nymphs and Shepherds with the Halle Orchestra.
Tubby and Enid were gorgeous characters, portrayed with great affection and talent by the actors. They reminded me in a way of another pair of Wood's characters, Tony and Bren from Dinnerladies. Two people who are clearly meant for each other, but who hold back, whilst all around them the audience are willing them on. There are some extremely touching moments in the production, Tubby's story regularly had me in tears, from the magical moment when he hears the recording for the first time in years and is immediately transported back to his young self onwards. And Enid is a joy, outwardly repressed and underselling herself, but when she belts out her inner feelings in the vibrant number 'Enid' Francolini quite deservedly steals the show.

The young man playing the boy Tubby at my performance, Alex Starke, was an absolute star. Fabulous voice and terrific acting with plenty of great subtle touches. I was really surprised when I read in the programme this was his professional stage debut, he was clearly born to be a performer.

As expected from Wood there are some acutely observed comic moments, I loved the reference to Matchmakers as a sign of social elevation, and the Berni Inns sequence was hysterical. But equally there were some very moving elements as the past and the present were portrayed.

The Palace theatre, and the Exchange couldn't be more different venues, but the creative team have done a wonderful job adapting the original production to this space. There are a few sight line issues, which you are often going to get in the Exchange, especially when you've got a 25 strong children's choir on the stage, but nothing that spoils the experience. The music is fabulous, the design is full of period detail, I especially loved the central light feature, it really was a thing of beauty and was used cleverly during the production.
All in all this was a distinctly Northern, very affectionate, touching and funny production that was a joy to experience. In fact, I wanted to book a repeat visit, but it was sold out so you lucky, lucky people that are packing out the Exchange until the 18th of this month - enjoy. 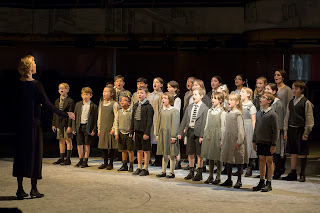