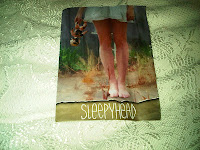 My second bit of Aussie culture blogging whilst on my jollidays (slightly delayed, blame the readjustment to real life!)

Sleepy head was a play being staged at Blue Room theatre which is an intimate performance space seating around 70 in the environs of the Perth Cultural Centre. Written by a western Australian playwright, Nathaniel Moncrieff, and first performed in Melbourne, it formed part of the Fringe festival programme.

It was a strange play, a dark tale about two sisters, Eleanor and Genevieve, living in the Australian outback with their abusive drunk of a father and follows events of a few days as the father abandons his daughters for a while, the threat of a dangerous stranger, and the appearance of a frightened, blood-soaked girl. All the main characters have been damaged in some way by their lives, the girl’s mother has died, although the full details of her death are not immediately clear, Genevieve is disabled after a traumatic event and spends most of her time wheelchair bound, taking solace in her dolls and her ‘imaginary companion’. Ellie is rebelling against life and her family, the father is struggling to cope.

Most of the play concentrates on the two sisters Gen (Louise Cocks) and Ellie (Amy Murray). They have a complex relationship, at times Ellie shows great compassion towards her sister, and at others she can be intolerably cruel. Both actresses gave strong performances of such complex roles, and I was particularly impressed with Louise Cocks as Gen.

This was an interesting play, and I think with a bit of fine tuning it could be excellent. The set was simple and the use of lighting and sound conveyed the oppressive heat and sinister threat brilliantly. However, the scene changes were unnecessarily complicated and clunky and broke the tension of the piece. And I found the character of Ellie slightly overworked which made it hard to invest in her character, or believe in the horrific events later in the play. But it was very dark and thought provoking and was well played by the small cast. And it was a great experience to see some ‘local grown’ theatre on the other side of the world.