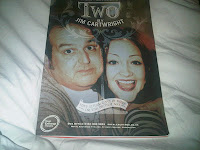 I deliberately arranged a trip to the theatre for my first weekend back in the UK in a hope that it would chase away the post – holiday blues, and it didn’t disappoint.

Two, by Jim Cartwright opens in a pub, where a landlord (Justin Moorhouse) and landlady (Victoria Elliott) are bickering their way through another night’s service. We then meet a number of other customers, all played by the same actors, and see snapshots of their lives, many funny, some heartbreakingly touching, with a few shocks thrown in for good measure. We also gradually learn more about our hosts and the unspoken pain and regret that drives their current animosity.

The play is energetically paced, with the many exits and entrances making full use of the Exchange’s multiple access points and each scene leading seamlessly into the next. And the set design is extremely clever, a circular bar making good use of the performance pace, with an extremely striking chandelier constructed of tier upon tier of real bar glasses suspended over it.

I last saw Justin Moorhouse in Zack at this theatre, a part that he was well suited to, but one that was not that far removed from his personality and comedy roots, and I have to admit I did wonder how he would fare in a more varied role. However, he more than did the part justice, both in the comedic, and the darker elements. He has a great ability to create a rapport with the audience and this was used to great effect. And in the performance that I saw, he dealt very well with getting tangled up with an audience member’s handbag and dragging it halfway across the stage, only the minor corpsing on the stage giving the game away that it wasn’t a deliberate part of the show!

Victoria Elliott showed herself to be a fantastically versatile actress, truly inhabiting each part she played. On more than one occasion I was having to look very closely to convince myself that the part hadn’t been suddenly recast! Her comic timing was spot on, but the detail she put into each of her varied characters, including the extremely touching conclusion to the play, was quite stunning.

All in all an excellent antidote to the post holiday blues.

(I wasn’t able to take a picture of the amazing chandelier, but the Exchange’s Education Officer, Lia

m McCormick, has been kind enough to provide me with one of his taken from below which will give you some idea of its splendour!)