No Sleep For The Haunted - The Studio, Lowry Theatre Salford 9/3/12 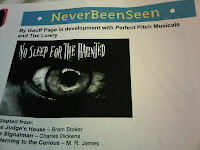 Now this one had me intrigued, a new musical by Geoff Page consisting of three ghost stories. It seemed like such a strange concept and one that I just couldn’t imagine, so I toddled off down to the Lowry to see how on earth they were going to make it work.

The piece is part of The Lowry’s ‘Developed with’ strand in The Studio, a programme which works with new writers, artists and companies, helping them to develop and showcase new work and hopefully sending it out into the big wide world to flourish. The show is billed as ‘a new musical in development’ and this is made clear to us at the start, in fact we are all given feedback forms before we even enter the auditorium. Personally speaking, as an audience member there is something quite exciting about knowing you are in on something at the start and may be able, even in a small way, to influence how it develops in the future.

The show centres on three ghost stories – The Judge’s House by Bram Stoker, The Signalman by Charles Dickens, and A Warning to the Curious by M.R. James, and they have been linked together in quite a clever way with the character of Long (Darren Southworth) leading us through the first two tales and being a part of the third. The small cast is completed by Fred Broom and Ryan Greaves who portray a number of characters through the stories.

The Judge’s House starts us off, and although this felt to me to be the most under-developed musically, it was arguably the creepiest, and possibly the reason why I am typing this right now with the lights on rather than sleeping!

The middle tale, The Signalman, was excellently played and seemed the most mature musically. Looking at the programme notes this is unsurprising as it is the piece that has been around the longest, having originally been staged in 2010 as a 30 minute musical as part of a workshop at The Lowry. The only thing that didn’t work for me in this piece was the decision to break for the interval mid-way through which did dissipate the tension a little

The third tale, A Warning to the Curious, whilst perhaps not quite as mature as its predecessor, had some of the most memorable tunes, Fred Bloom’s rendition of ‘Stuff and Nonsense’ being a particular highlight for me.

The cast are excellent, fine voices all, and bringing an energetic mix of scares and humour to the stage. The set is simple and cleverly used, allowing for seamless transitions between the various settings, and the lighting and sound worked well to compliment the piece (although the rats did threaten to drown out Mr Southworth’s fine voice at one point)

All in all this was a really exciting and original thing to experience and hopefully it will develop further in the future. And it’s really opened my eyes up to the breadth of things that go on at the Lowry, and the incredible value for money that The Studio productions offer. I have a feeling that they are going to be seeing a lot more of me in the future!