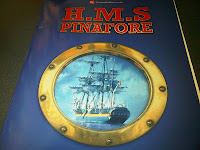 A sunny Sunday in Manchester saw a Mother’s Day trip out to the Bridgewater Hall to see a concert performance of HMS Pinafore. This production was initially meant to star Russell Grant in the role of Sir Joseph Porter. Unfortunately due to an urgent knee operation, he had to pull out of the part a couple of weeks before. Whilst he had taken pains to communicate this to his fans on social media, the promoters, Raymond Gubbay seemed to have been a little slow at following suit, still billing him in press adverts and on their website as the star a week before the concert. Consequently there were a few disappointed people arriving at the venue and seeing the small sign announcing the substitution.

This was my first proper visit to the Bridgewater Hall and it’s an impressive venue, it’s light 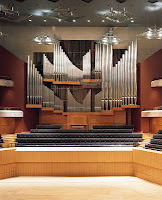 and airy, and the back of the hall is covered in the pipe structure from the organ and looks like some kind of art installation. And once the wonderful Manchester Concert Orchestra started up it was clear that the acoustics were excellent, you felt like you were surrounded by the music. I’m told that no matter where you sit in the hall the sound is just as good. The main performers were miked, and there was the odd issue with sound at times with them, but this was minor and didn’t really detract from the overall performance.

On the stage were the Orchestra, the chorus and the main performers. Whilst a degree of latitude had been given regarding the age appropriateness of some of the casting, they all gave fabulous performances. My favourites were Simon Butteriss, who made a fabulously camp Sir Joseph Porter, bringing a lot of giggles to the stage, Oliver White, as the dashing deckhand Ralph Rackshaw, combining a very good characterisation with a great voice, and Louise Crane as the incorrigible Cousin Hebe.

Overall, this was a great show, it didn’t take itself too seriously, the music and performances were excellent, and by the rousing reception at the end from the audience, any disappointment at the last minute casting change had been more than made up for. A lovely way to spend a Sunday afternoon.