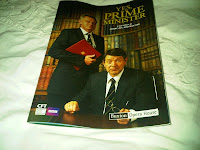 Not my normal choice of play this one, but I do remember the television series with fondness, and it was a treat for my Dad’s birthday. Buxton Opera House itself is always a gorgeous theatre to visit, its beautiful inside and has a really varied programme, I’ve seen all kinds of entertainment there over the years.

The first thing that strikes you as you enter the theatre is the impressive set, a book-lined wood panelled room at Chequers taking up virtually the full height of the stage. Considering this is a touring production that’s quite an achievement.

The actual play was a bit of a mixed bag for me to be honest. The action has been updated to the modern day, and there are a lot of very clever pieces of dialogue that are satisfyingly close to the kind of things that go on in politics today. I particularly liked the concept of the standard answers that could be used for any external official comment and I wouldn’t be at all surprised if a similar folder exists somewhere at Westminster. But the plot could have been tighter, and the middle section especially, where the key players are trying to decide how to respond to a somewhat unusual request from the Kurmanistan diplomat, was dragged out way beyond its natural life.

For this performance the role of Sir Humphrey Appleby was taken by the understudy, Simon Holmes, and I thought he played him excellently. His delivery of Sir Humphrey’s lengthy responses to questions, erudite whilst at all times completely avoiding answering the question asked, was a particular highlight and earned him well-deserved applause from the audience.

However, Graham Seed as Jim Hacker the Prime Minister was, for me, a bit of a disappointment. There was a bit too much mugging for my liking, if the farce had been toned down a little I think it would have made for a much better performance. He also stumbled over quite a few lines and cues, possibly because of his, in my view, over energetic performance. 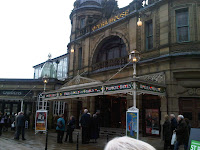 my personal reservations about elements of the plot, some performance decisions, and the pace of the show, there was a lot to enjoy in it and some very clever satire at times. And judging by the reaction of the packed audience a lot of people would disagree with my minor niggles.