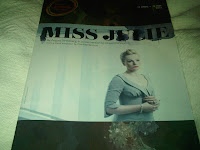 Miss Julie is a play written in 1888 by Swedish playwright August Strindberg. It tells the story of a Midsummer night in the life of the aristocratic Miss Julie (Maxine Peake), and her household, in particular her infatuation with her father’s valet Jean (Joe Armstrong).

Maxine Peake is the obvious draw for this production, and she doesn’t disappoint. She fabulously portrays a highly complex character, in parts manipulative, cruel, passionate, possibly possessed of madness, but ultimately vulnerable. Her performance is delightfully agile, effortlessly portraying the many facets of her character, and quite mesmerising to watch. I have had the good fortune to see Maxine Peake on stage a couple of times now, and in her numerous TV roles, and I think she is one of the most exciting actresses out there.

Her interaction with Jean over the course of the evening and into the next morning is almost like a dance, with the balance of power shifting between the two as Jean initially appears to fall under her spell, but then the status of their relationship changes and he becomes the manipulator, ultimately holding her fate in his hands. Joe Armstrong gave an excellent performance of an again complex role and was well matched with Peake’s Julie.

Carla Henry makes up the main cast as kitchen maid and Jean’s ‘fiancé’ Kristin, who initially appears to be a very meek character, but ultimately shows great strength and morality as the relationship between her employer and her fiancé breaks through into her world.

This production uses a new English version of the script written by David Eldridge. The language works really well in portraying the different classes of the participants, being accessible to a modern audience without feeling ‘out of its time’.

The set is simple but effective, and the lighting clever, bathing the scenes in gorgeously soft light from a large balloon like structure suspended high above the stage.

Having said all that, for me personally I found it a tricky play, maybe because Strindberg is new to me. It was hard to understand the motivations of the main protagonists, whilst Miss Julie is tinged with some level of mania, which maybe explains how her actions and emotions can vary so, it is less clear where Jean is coming from. Initially he appears to be under her spell having worshipped her from afar in his youth, yet later he appears manipulative and without compassion, and you question whether everything you have seen from him in the earlier stages of the play was an act. Ultimately the strength of the performances and the staging lead to a truly memorable experience, but I’m not sure it will have me rushing to the Strindberg back catalogue!