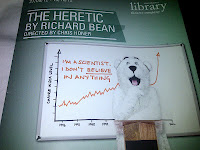 So then, a play centring on a climate change expert who has received death threats - doesn’t really sound like it will be that much fun does it, but from the pen of Richard Bean (he of the ‘One Man Two Guvnors’ phenomenon), with an exemplary cast brought together by the Library Theatre Company, and directed by the brilliant Chris Honer, this turned out to be one of the sharpest, most intelligent comedies I have seen. Oh and it is extremely funny too!

Dr Diane Cassell (Kate Hamer) is receiving death threats associated with her scientific stance on climate change, which she is not afraid to express, even when it is at odds with the party line of her department. One of her students Ben (Ciaran Kellgren) is struggling to reconcile his brilliantly scientific mind, with his paranoia over his carbon footprint. Ben has the hots for Dr Cassell’s firey daughter Phobe (Sophie Robinson), a highly intelligent young lady, home schooled by her mother, but dealing with a few issues. Dr Cassell’s boss, Professor Maloney (Stuart Fox), with whom she has a ‘history’, is struggling to balance the demands of home life, academia, commerce and politics and reign in his outspoken lecturer.

Rounding off the cast are the support workers, Site Services and ex-army man Geoff Tordoff (Andrew Westfield) who is investigating the death threats, and spikey HR Officer Catherine Tickell (Polly Lister), a stickler for due process.

The script and direction are incredibly sharp, and whilst there is a lot of science it is pitched extremely well, neither alienating the audience, nor getting in the way of either the action or the humour. The writer does not talk down to the audience, but does encourage them to challenge the facts and their preconceptions. The pace is perfectly judged, and the laughs come thick and fast.

The cast that has been assembled is very strong and all give fantastic performances that complement each other perfectly. I especially liked Andrew Westfield’s site services specialist, Geoff, with an aim to bring excellence to the workplace, and Ciaran Kellgren’s student Ben, so paranoid about his own carbon footprint that is gradually imploding. Both brilliant comedy performances, incorporating some well-judged subtleties that had me in stitches.

Whilst I had a few problems with the later moments of Act Two, that didn’t seem as well constructed as the rest of the play, this really was one of the most intelligent and downright funny plays I have seen in a long time. Definitely recommended, and through the laughs I think I actually might have learnt a bit of science too!

Email ThisBlogThis!Share to TwitterShare to FacebookShare to Pinterest
Labels: Library theatre Company, The heretic, The Lowry