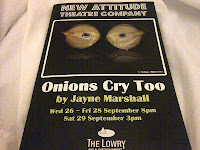 Yet another trip to my second home, The Lowry Studio, to see brand new play Onions Cry Too, by Jayne Marshall. Reading the programme, the writer and I have something in common; she was inspired to become a playwright after seeing On the Shore of the Wide World, by Simon Stephens (staged by the Royal Exchange in 2006). That was the first play I ever went to on my own, and realised that no-one gives solo theatre goers a second glance. I then went from a theatre lover to a theatre obsessive, and she became a very promising new writer.

‘Onions’ is a very original and intriguing play. It focusses on four characters in what appears to be a nursing home, but you soon realise that there is something else going on here, although what is kept tantalisingly out of reach for almost the whole of the performance. It’s quite a brave decision to keep so much back from the audience for such a long time, by the interval I still hadn’t got a clue what was going on. But it does keep your attention as you are constantly thinking about whom these people are, what is really happening, what game is being played and who really has the power.

I found the pace somewhat stilted at times, especially in the opening scene, and I do think that its overall impact could benefit from a little tightening of the pace, and some careful editing to ensure the balance is right between intrigue and moving the action forward. And at times the cast didn’t seem to have fully settled into their roles, but at other times they delivered some lovely and very affecting scenes. In the second act I felt the play started to hit its stride more, and it did have some extremely moving elements.

I especially liked the characters of Alfred (Eryl Lloyd Parry) and Bertie (David Milne), who formed a lively partnership with some good comedy moments. In the second act they both also gave very touching and convincing performances, as they learnt some essential truths about themselves, their relationships and the path their lives had taken.

Arthur Bostrom as Charles had some nice moments of quite wicked comedy which were well delivered, but I found his the hardest character to actually understand. I never really felt I got to the bottom of whom or what the character represented, or what his real motivation was. The cast was completed by Bob Young as Donald, a character that by the end of the play was much easier to understand and delivered some very wry life lessons.
All in all, a play that kept my attention, made me think, moved me and kept me guessing, but one that could do with a few tweaks as and when it develops further.
Posted by Alison at 16:36

Email ThisBlogThis!Share to TwitterShare to FacebookShare to Pinterest
Labels: lowry