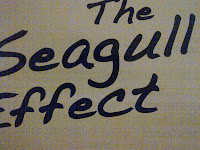 When the so called ‘Great Storm’ hit the south east of England in October 1987 I had just started as a trainee manager for J Sainsbury and was based in Horsham in Sussex. I don’t remember the storm itself, I must have slept through it, but I do remember arriving at work to see a huge queue of people outside the store. It turns out that the loading bay had blown in and couldn’t be opened, so we were unloading the trucks through a fire door, and this was limiting us to the amount of customers we could allow in the store at a time. Most of Horsham was without power, and would continue like that for three or four days, so demand for candles, matches, and tinned goods was huge. Watching the news that night, and seeing the devastation that had been wrought over large areas of the south east, felt quite surreal.

Idle Motion’s The Seagull Effect, told in a combination of narrative and physical theatre, takes us back to that night via a nicely conceived backwards dash through some major events of the last 25 years, which made me feel very old indeed. But, once it reaches the night of the storm it chooses not to focus on the big events, but the stories of individuals on that night, primarily the narrator (Grace Chapman), travelling to Brighton for a job interview, and a former couple (Joel Gatehouse and Kate Stanley) who are temporarily reunited by events and revisit their relationship over the course of the night.

The piece explores the journeys that we take in our lives, and how impossible it is to have certainty in their outcomes, how shared experiences can bring us together and how seemingly disparate events can be connected, contrasting that with the theories published by Edward Lorenz, mathematician and meteorologist, that minute changes in weather models (the flap of a seagull’s wings of the title) can result in huge variances in outcomes.

The show is beautifully put together, the cast of six bringing together an interesting and thought provoking narrative, precisely choreographed movement, and some clever and original use of projection and sound, to result in a moving and quite beautiful hour’s entertainment.
Posted by Alison at 09:40

Email ThisBlogThis!Share to TwitterShare to FacebookShare to Pinterest
Labels: idle motion, The Lowry