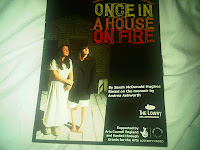 Once in a House on Fire, written by Sarah McDonald Hughes, is based on the memoires of Andrea Ashworth. It tells the story of Andy, and her sisters Laurie and Sarah, growing up in 1970’s Moss Side with their Mother, Lorraine, and a succession of stepfathers, against a background of domestic violence and poverty. I believe it was first part of the Lowry’s ‘developed with’ strand, and this was a return visit.

The story is mainly told from the point of view of the three sisters and the bond they have that helps them to deal with the poor cards that are dealt them
Mother Lorraine (Francesca Waite – who also takes on the role of Sarah, the baby of the family) is driven by a need to love and to be loved, and to create a good life and future for her family.  But her loyalties are confused in the face of the abuse from the men in her life, and her optimistic determination is gradually eroded by her poor choices and misplaced loyalties.

After the death of her first husband, she invests her hope of a new life for her family in second husband Peter (Thomas Aldersley),  who it becomes clear through some very powerful scenes is a violent and abusive man. When the family finally make the break from Peter, the new man in their life is the affable Terry (Matthew Ganley), a man who is almost pathetically grateful when the girls decide to call him Dad, and you think things might finally be turning round for the family, but a spell in prison brings out his darker side, and his jealousy of Lorraine’s attempts to gain more independence and security leads once again to abuse.

Through it, the sisters become the family unit, the clever and bookish Andy (Sarah MacDonald Hughes), dance mad Laurie (Emily Fleeshman) and baby of the family Sarah forming a tight bond, with Andy stepping into the role of mother and protector.
With the subject matter, there would be a danger that this play could be overly dramatic, but I thought it was nicely judged and very touching.  There were some extremely tense moments, such as the time you first saw the threatening side of Peter as he turned on his wife and then, in an unsettling scene, Andy, but there was also tenderness and humour. I loved the scene where Andy was at her friend’s house for tea with the ‘aspiring to be middle class’ parents Mr & Mrs Lee, which provided a good balance to some of the darker elements of the storyline.

The play unfolds in a series of ‘snapshots’ of the family’s progression, and there were a few points where I was initially a little confused about the passage of time from one scene to the next, but I’m notoriously slow on the uptake so it’s not necessarily a reflection on the play!

All the cast were great, but Emily Fleeshman was a particular highlight for me, she conveyed the different ages of Laurie really well, and you had such empathy for her character, but she was equally as good in the other roles she took on particularly Mrs Lee and Andy’s teenage pal Wendy (although I am a little upset to find out that Yates Wine Bar may not have quite as sophisticated as I thought it was at 17!)

All in all, a touching play, nicely staged and with some well-judged performances.
Posted by Alison at 13:59

Email ThisBlogThis!Share to TwitterShare to FacebookShare to Pinterest
Labels: lowry, monkeywood, once in a House on fire