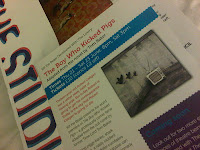 As the seasonal summer driving rain and biting wind pounded Salford, a little bit of dark magic was being performed within the confines of the Lowry Studio.

Tonight’s show was another in their ‘developed with’ strand, which provides support to emerging artists, writers and companies, allowing the development of new work and sending it out into the wider arts world like a proud parent!

In my opinion it’s an incredibly  important activity, in a climate where mainstream arts seems to be relying more and more on tried and tested formulae, and this piece was an extremely good advert for the quality of work that can be created if a few chances are taken.

It is an adaptation of a cult novel by Tom Baker (yes that Tom Baker), about a nasty 13 year old, Robert Caligari, who ultimately gets exactly what he deserves. A joyfully warped tale combining darkness and comedy with an impressive deftness of touch.

Kill the Beast were formed specifically to mount this project, and a truly collaborative approach to the adaptation of the book and development of the piece was taken, with the Director, Clem Garrity, and the cast, working together on the script and the staging, which is possibly what contributes to such a fast paced yet tight production.

The design is glorious, shades of grey in both set and costume design, and simple but effective use of subtly animated back projection, together with minimal but versatile set, combine to produce an atmospheric feel, almost like it has been produced by the mind of Tim Burton’s evil twin (the one they keep locked in the attic)

The script is sharp, witty and surreal, the dialogue cracks along at quite a pace and is delivered by an excellent cast of four taking on all the parts and delivering them with glee.

The cast themselves are quite brilliant, they work together so well, delivering what are at times incredibly complex and rapid scenes flawlessly and with pin sharp timing. My particular favourites were the neighbours gossiping, which combines sharp dialogue, precise choreography and excellent rhythmic delivery, and the motorway scene, switching between the groups of protagonists at such a rate, and yet never losing it’s impact or comic touch.

David Cumming’s portrayal of the central character, Robert Caligari, is a delight, the physical embodiment of this evil little horror is wonderful to watch, making you feel he truly deserves his final comeuppance. Natasha Hodgson’s portrayal of the sister Nerys, is wonderfully well observed, as is Phillip, the work experience boy. Zoe Roberts, and Oliver Jones make up the cast and both excel in their various roles. I really can’t praise the cast enough, they worked together so well both in terms of characterisation, and comedic timing.

I wish this production well as the Lowry waves it off into the big wide world (although I hope it comes back to visit!). It was the perfect antidote to the soggy and stormy arrival of ‘summer’, beautifully judged, gruesomely warped, and very very funny. If you are quick there are two performances left and you will not be disappointed.
Posted by Alison at 17:42