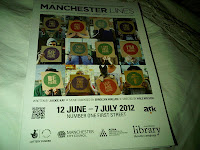 Manchester Lines is the second in a series of ‘site specific’ productions that the Library Theatre Company is undertaking whilst it is temporarily homeless. This production utilises the fifth floor of a modern office building in Manchester, which will in time hopefully be adjacent to the new home of the combined Library Theatre and Cornerhouse, who are joining together to create a brand new Arts Centre in Manchester.

I’m a bit torn on blogging about it, as I think the less you know about the production and what will unfold, the more magical an experience it will be. I went along with very little prior knowledge, and it turned out to be one of the most unique, thought-provoking and uplifting pieces of theatre I have seen.

Manchester Lines is set in a lost property office, overseen by the ‘keeper of lost things’ Eugene, and through a series of scenes, presented in a non-linear format, we get a glimpse of the lives of the people who visit it, the things we lose, and gain through life’s journey, the way disparate lives can cross in unexpected ways, and ultimately the value in believing in the good of people.

The experience starts as you arrive at the venue and are escorted in the lift to the fifth floor, from there, by way of a corridor filled with curious ‘lost things’ you enter a lost property office, filled from floor to ceiling with a wide variety of items that the audience is free to have a look round. The attention to detail is impressive, although after having seen Hard Times last year, I was not surprised at the quality of the set.  Clever use of sound, emanating from the shelves, all adds to the atmosphere. Then the audience settle into the seating scattered around the space, feeling as if you really are part of the scene, and the action begins.
The play itself is a mix of straight scenes, dance and sung poetry, as the various characters connection with the lost property office, and each other, unfold. It is quite mad at times, at others deeply moving. The language, especially the poetry, is beautiful, and the cast all give excellent performances.

Eugene, the central role, is excellently played by John Bramwell. This is a man who takes pride in his job, has a gentle northern humour, and great compassion for the people who walk through his doors. All the cast were fabulous, giving great acting and singing (and even dancing) performances. Anne Kidd as Jessie gives an extremely touching performance that nearly had me in tears on a couple of occasions as her story unfolds. Mother and son team Pauline (Claire Brown) and Louis are nicely judged, playing off each other well, but equally impressive in their individual scenes. I was particularly impressed with the young actor playing Louis (Marcquelle Ward), he had great energy and timing.

For me the stand out performance was that of Bettrys Jones playing Anna. This was a powerful portrayal of a complex and potentially unlikeable character, perfectly pitched and quite mesmerising.
The ending of the play is unexpected and extremely moving, many of the audience, myself included, lingered long after the ‘official’ end of the action, almost as if we didn’t want to break the spell that the proceedings had cast.

I’ve long been a supporter of the Library Theatre Company, and sad though it was that they had to move out of their old home never to return, the quality of work that they have been producing since they left the Central Library is amazing, especially the ‘site specific’ work, and I would definitely recommend people to go and see this production if they can get a ticket. It really was a memorable, emotional and unique experience.