I’ve just finished a spot of volunteering for the Manchester Day Parade 2012, and the parade itself was a wonderful end to an enjoyable and rewarding experience.

The first Manchester Day Parade took place in 2010, with Walk the Plank, a brilliant arts and events company, engaged to produce it. I volunteered, and enjoyed it so much they’ve not been able to get rid of me since!

The Parade website has lots of information about the event and its background (and you might stumble across a video with a bit of me on!) but at its heart it is a celebration of the spirit and diversity of Manchester, with people from all walks of life involved in its creation. Each year has a theme, the year was The Sky's the Limit, and community groups work with artists to turn their ideas into some amazing creations.

As a volunteer, my involvement started in May with attendance at a couple of Mas Camp weekends, where some of the artists, community groups, and volunteers, work on elements of the parade. I really enjoy the making side, so have always asked if there is any extra help needed outside these weekends, and this year did quite a bit of ‘extra’ volunteering in evenings and weekends. It’s so interesting to see everything start to take shape and to get involved, and you meet such a great mix of people. Towards the later stages of preparation, I mainly helped one of the artists, Brian, as he had a lot of work on making costumes for three separate groups, and constructing an 18 foot air hostess! Many of the costumes used lots of colourful florists ribbon, which I loved working with, and so much of my time at the workshop was spent in what I came to term ‘ribbon corner’. In fact Jan, one of the project managers, did suggest I was making a nest out of florists ribbon, and I have to say, that’s not a bad idea! 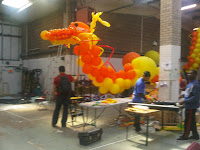 It all comes together on Parade day, which is the first time you see all the elements of the parade assemble. Many have been made away from the workshop, for example, with the community groups, so it's only on the day when the sheer scale of it becomes truly apparent. I somehow managed to be appointed volunteer team leader at the workshop, although I’m not sure how much actual leading was taking place from me (apart from sneakily cherry picking a few people at registration who I knew would be good!) The real organisation on the day is done by the production team, and ‘my’ volunteers were fabulous, getting stuck in where they were needed with little intervention from me , moving stuff up to the parade start, and even getting involved in some last minute making (including creating balloon structures and emergency superhero finishing!)

The busiest time for me was as Brian’s groups started to arrive, as I was helping get them into their costumes, especially as the largest group with the most complex costumes, the lovely ladies from the East Manchester Academy, were not arriving until nearly 1pm. Although this was slightly crazy, as I had helped with many of the elements of the costumes, it was great to see them be worn, and by the skin of our teeth, and with lots of people pitching in to help, we managed to get everyone up to their starting positions in time and in costume.

During the parade I helped to marshal, it was a wonderful atmosphere, the sun came out, the crowds were huge and seemed to be enjoying themselves, and my group, the Manchester Carers, looked beautiful as they danced through the streets.

With a couple of my former MIF buddies, Michelle and Alison, who had also volunteered (mainly through my badgering), I ended the day with a well earned drink, bizarrely on a beach in Castlefield, and we all agreed it had been a great day. Looking back at the many photos on the internet (some of the best I've seen are here), I’m so happy to have been part of it once again, and proud of my involvement. Fingers crossed there is a 2013 parade, and they let me back!
Posted by Alison at 12:30