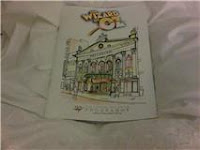 A sunny Sunday morning in London town saw me head up to the Palladium to see if there were any tickets available for that day's performance of the Wizard of Oz. Whilst I am not a big fan of TV talent shows in the main, I was hooked on the BBC's 'Over the Rainbow', and had been quite keen to see the stage production ever since. A lovely member of the box office team sold me an excellent seat in the centre of the second row of the circle (the advantage of lone theatre visiting is that you often get great seats!) at a bargain price. Sunday is obviously a family day at the theatre (one advantage being no queue at the bar!) as I was surrounded by very excited small people ready for a bit of theatre magic!
The show itself was great fun, although at times the clever set design almost upstaged the cast. I assumed that for Sunday performances the swings would take the roles, but it was the main cast with Danielle Hope, the winner of the BBC show, in the title role. For someone in her first professional stage role she did excellently, although to be honest the rest of the cast is so strong that her's was not the most memorable performance. Hannah Waddingham, as the Wicked Witch of the West, blew me away, what an amazing and powerful voice that lady has! And the Tin Man, Scarecrow, and Lion (Edward Baker-Duly, Paul Keating, David Ganly) made a brilliant team. I however, was the only person in my bit of the auditorium who laughed when the lion stepped forward and declared himself 'proud to be a friend of Dorothy' getting some strange looks from my fellow audience members!
The actual staging of the show was very clever. There was a two piece central revolve that was also able to tilt and disappear below stage level, which meant it was able to seamlessly transform into the various settings. Characters swooped down from the full height of the auditorium (meaning at one point I was almost face to face with a witch), and it even snowed on me!
The songs you know from the film are all executed well, and there have been some new additions which really add to the show, rather than just padding it out. All in all, I, and all my small companions, had a very enjoyable afternoon at the theatre, but if you are a big kid reading this, I would really encourage you to also see Wicked, which will add to your whole Ozian adventure!
Posted by Alison at 02:40