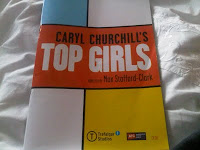 I went to this show knowing very little about it. I had seen an interview where Suranne Jones mentioned the eighties setting, and I knew it was by Caryl Churchill, and that's it really.
Trafalgar Studios have been renovated since I was last there, and you actually enter at stage level now, which gave me a bit of a shock as I thought I'd got lost in the theatre and taken a wrong turn! But it makes for a nice theatre space where you feel very close to the action.
The first act of the play is a fantasticly clever concept, although it took me a little while to realise what was going on! Marlene (Suranne Jones) is hosting a dinner party for some other 'Top Girls' from various points in history. It's realistically played out, guests talking over each other, trying to outdo each other's stories, more than one conversation going on at the same time, and the whole mood getting increasingly loud and raucous as the Frascati flows. The cast do an incredible job, the timing on its own must be a challenge, but each of them gave an finely observed performance and it feels wrong to single anyone out. However, I especially loved Olivia Poulet as Dull Gret, who initially does not have much to contribute 'lines wise' but had the audience in stitches. There is a lot going on in this Act, I would love to see it again as its quite a challenge as an audience member keeping up and knowing what to focus on. Its also a very moving piece, there are elements of high comedy, but also some extremely tragic stories unfold. Lucy Briers as Pope Joan, desrcibing the 'end' of her story in a very matter of fact way is quite shocking and you could hear the collective intake of breath from the audience!
The second and third acts were more 'normal' in terms of storytelling, looking at Marlene's life and background, although moving back a year in time between the two acts. Again there was a lot of comedy, but at its heart a some quite hard questions about what it is to be 'successful' and what can be lost. Suranne Jones as Marlene was fantastic, and the final scenes between her and her sister Joyce (Stella Gonet) were brilliantly played by both actresses.
I really enjoyed this play, it was unusual, clever, made me think, and had an very strong cast. If I lived nearer I would definitely be tempted to see it again.
Posted by Alison at 10:53