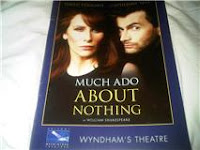 So, off to the Wyndhams Theatre with my pal Bronya for the much anticipated pairing of Catherine Tate and David Tennant as Beatrice and Benedick in Much Ado. I say much anticipated as I think I've had the tickets for about five months, but I wasn't convinced I was actually going to see Mr T in the show as the last time I booked a play months ahead to specifically see him (Hamlet) he very selfishly sustained a back injury a few days before, how dare he! Although, the RSC's Hamlet was a brilliant production, and his understudy, Ed Bennett, was fantastic as were the rest of the cast.
Anyway, Mr T made it to the stage this time, along with Ms Tate and an excellent cast. The setting for the play was 1980's Gibraltar, which was a great excuse for cheesy disco, dodgy eighties fashion and the odd rubics cube!
I think this is probably one of the most accessible, and fun, productions of Shakespeare I have had the pleasure to see. It stayed true to the text, but incorporated some hilarious slapstick (especially the Beatrice and Benedick 'eavesdropping' scenes, which I won't spoil here just in case anyone reads this who is going to see it), riotous stag and hen do's, dance numbers, and even a bit of eighties style 'hey nonny no' thrown in for good measure!
As for the cast, well T & T were a fabulous partnership, as expected, but the production had brought together a terrific ensemble - I was particularly impressed with Hero (Sarah MacRae, making her West End debut) and Claudio (Tom Bateman, who I was amazed to read in the programme was making his professional debut) - but all the performances were well realised and you could tell the cast were having fun with the roles.
All in all a production that was definitely worth the wait, an extremely enjoyable afternoon of Shakespeare, and dare I say it, worth every penny of the astronomical London ticket price! And I got to see David Tennant in a miniskirt and fishnets - what's not to like!
Posted by Alison at 14:59