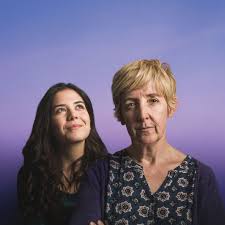 This production at the Royal Exchange is a world premiere of a play that won a Judges award at the 2015 Bruntwood Prize for Playwriting. Written by Kendall Feaver it proves a powerful exploration of some of the issues associated with the diagnosis and treatment of mental illness in young people. Whilst that sounds somewhat dark, and there are very moving scenes and complex issues explored, the play is also at times very witty and the characters are interesting, believable and excellently portrayed.

Anna (Norah Lopez Holden) was diagnosed as a seven year old and has been medicated since, but as she enters adulthood she begins to question her treatment and the motives of those who care for her. Looking back at some of the writing she produced as a child, with its powerful imagery and disturbing themes, she is keen to explore her talents and suspects that the drugs inhibit her imagination and what it is to be her.

Mother Renee (Julie Hesmondhalgh) has fought fiercely to protect and get treatment for her daughter, and struggles with Anna’s desire to take control of her own choices. New boyfriend Oliver (Mike Noble) falls for her bravery, originality and randomness, but then finds it difficult to deal with both her manic behaviour and Renee’s desire to bring him onto her ‘team’ to protect Anna.

And then there is psychiatrist Vivienne, who has been treating Anna since childhood but also used her story to further her own reputation, calling into question whether care for Anna was always her primary driver, as she has proved a fascinating case study.

It’s a well-constructed piece, heart-breaking at times but with a wit and spirit that runs through the story. It highlights the complexities of diagnosis and treatment of mental illness and how much we really don’t yet know. One of the most thought provoking exchanges for me was when Renee, beginning to question whether the treatment she fought so hard for was the right thing is told by Vivienne that the drugs they used to potentially save Anna will have changed her for ever, so there is no way they can rewind the clock and try again. 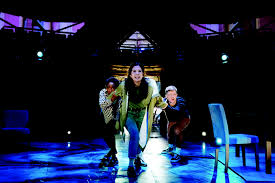 Performances from all are excellent but Norah Lopez Holden blew me away with her agility as an actress and the depth she was able to bring to this complex character. You totally connected with her, making her journey during the play so moving and compelling.


I thought this was an excellent piece of work and a pity it had such a short run on the main stage at the Exchange, but hopefully it will have a life ‘beyond the pod’ as it deserves to be seen, and discussed, more widely.
Posted by Alison at 12:08