The Prince and the Porpoise, Didsbury Players, 27/1/18

So the Christmas revelry is over and its time to get serious I guess. (Oh no it isn't, oh yes it is) But not before a bit of seasonal silliness with the Didsbury Players with their Original ( and quite unique!) pantomime The Prince and the Porpoise. 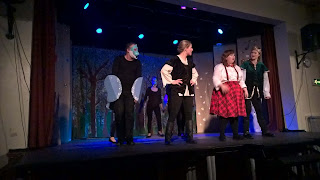 Written by one of their merry band of players, Jon Martin, the panto is the tale of  evil ( and very orange) Businessman Donald Trout's plans to make Pantoland great again by tearing down the woods where Jane and Mal live with their evil Stepmother Mother May, who one suspects may have been having a special relationship with the tangoed terror. As well as getting a helping (tiny) hand from May, Trout has bewitched the people of Pantoland turning them into his Zombie Porpoise Army. Only Prince Dashing, and love of course, can save the day!

With more marine based puns, than you can shake a fish stick at, some very groanable ( in a good way) one liners, clever modern references ( including some very topical references, one particular line of Trump's ( ooops sorry Trout's) having been inspired by the previous day's news) , lots of singing, dancing and general silliness this was a fun and at times surreal way to spend an evening. 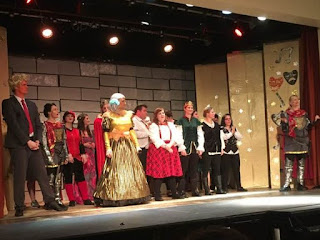 The players were clearly having a great and it was infectious. They made the most of having some great singers in the cast, showcasing their talents in some lively numbers with fun choreography.  There were plenty of laughs and lots of the traditional panto shenanigans were present, allowing plenty of opportunity for boos, cheers, oh no's, and trumpet fanfares from the audience. 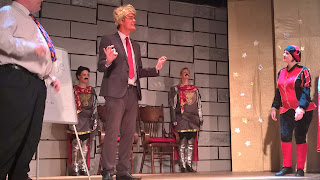 Jonathan Robertson as Trout somewhat stole the show with his excellent and very funny performance. Memorable though he was, my abiding memory of the show has be the Zombie Porpoise dance troupe. Let's face it, you haven't lived until you have seen a singing Porpoise leading a Porpoise Army in a full on Abba routine. Or our marine friends dancing to Donald singing Michael Jackson's hit Bad. Quite surreal but totally hilarious.

#hakenews this isn't. This panto was a shoal lot of fun and left me giddy as a kipper.
Posted by Alison at 04:21