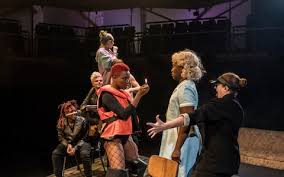 I’ve never seen the 1977 film Jubilee, on which this production is based, so I had no preconceptions of what I was about to experience. OK when I say that, having received two warnings from the theatre that this performance was not for the faint hearted, I did feel that the pre publicity might be trying a little too hard, but I did go with an open mind. 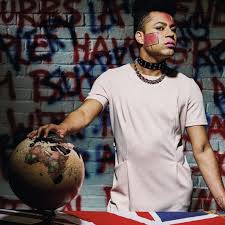 Let’s start with the positives. There are some fantastic performances in this production. Travis Alabanza, as our ‘narrator’ Amyl Nitrate has an amazingly charismatic command of the stage. Rose Wardlaw as Crabs and Sophie Stone as Bod are also very impressive complex characterisations, beautifully realised. And it was great to see Yandass Ndlovu, who I saw with Flex-N as part of the Manchester International Festival in 2015 (a totally stunning show) give a great performance in a central role. Oh yes, and Toyah Willcox is in it too, something that has been heavily publicised, although her role is very much on the periphery of the action, observing the rebellion, disorder, desires and chaos below.
The show has some powerful themes, that feel very relevant to our time, and the script incorporates some nicely acerbic modern references. Despite some of their actions, you care about the characters and their fates. And there are a few set pieces that are fantastic, particularly in the second act. 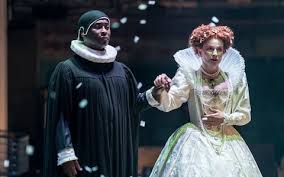 However, this show never felt like it really lived up to the sum of its parts for me. The first act sets out to shock, but seems to try a bit too hard. It’s overlong, there’s no real strong narrative and I began to lose interest. At the start of the second act it’s pretty obvious that some of the audience have left, in fact the performance makes a thing of it, congratulating itself on the type of people that just can’t take their reality. Whilst I enjoyed this act two kick off, I was also a little cynical, as I can imagine that many of the ‘escapees’ were, as I was, not shocked in Act One, but honestly, a bit bored and not convinced the rest of the performance was worth their time. I’ve always been a one to stick it out however, and Act Two was livelier, more meaningful and went some way towards pulling the whole thing together.

I have seen some great reviews for this show, and people raving about it on social media. With all the buzz and the warnings I was very interested to see what this show delivered. Would it be controversial, challenging and stimulating, or would it be a teeny but self indulgent.  Whilst it contained great performances and moments of brilliance, it did veer towards the latter for me and I left a bit disappointed. However, the excellent programme notes helped me to understand its intent and origins more.

This production will be transferring to the Lyric in Hammersmith in February (Angel and Sphinx might want to take their big coats, it gets quite parky in February!!)
Posted by Alison at 07:01