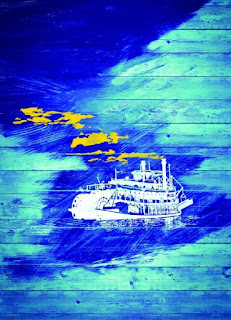 It's Christmas and that only means one thing in my theatre obsessed mind, no not panto , but a festive trip over to Sheffield to see what Christmas musical delights are on offer. This year the Crucible are staging Showboat by Jerome Kern and Oscar Hammerstein II, a show first staged in 1927 and quite controversial at the time, combining the more traditional romantic stories with darker themes including racial identity and injustice. 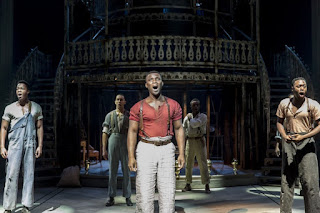 This production doesn't shy away from the tougher themes, in fact it highlights the racial divisions through a powerful piece of staging in the very opening of the performance and its treatment of the more serious elements of this epic tale remain impactful and relevant throughout. It is maybe more of a considered, serious musical than many of the Crucible's recent festive offerings, as the tale unfolds it is tender, heart wrenching at times and full of impact, but there are a few out and out foot stompers that allow the cast to make full use of the crucible's generous stage. 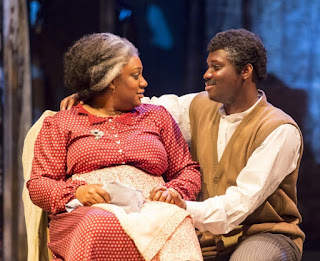 As always an incredibly talented cast has been assembled for the show who work together with such fluidity that even scene changes are a thing of beauty. With such immense talent on display it seems churlish to pick favourites but I will! Emmanuel Kojo and Jason Denton as Joe and Stevedore were fantastic and their rendition of Old Man River will stay with me for a very long time. Michael Xavier portrayed the complexities of Gaylord Ravenal's journey finely and has a powerful but unforced voice and Sandra Marvin as Queenie has a beautiful voice and gave an incredibly engaging performance. 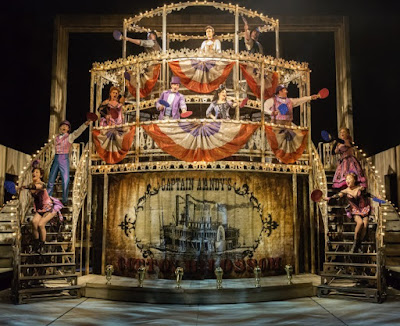 The design is first class,from the sumptuous costumes, gorgeous lighting to amazing set design, it's what we have come to expect from the Crucible but no less delightful for that. The initial set reveal is simply breathtaking, plain wooden panels line the rear of the stage when we arrive which seem to magically disappear as the show gets under way to reveal the most gorgeously detailed steamboat deck with action able to play across three levels vertically as well as over the large thrust stage of the space. When the boat is not present in the Chicago scenes the wooden backdrop allows for extremely effective use of back projection, which as well as providing set detail, is used to great effect in transition scenes and is especially effective in detailing the passage of time and some of the major headlines associated with it, giving a nice historical context to the events portrayed.

Director Daniel Evans is moving on from the Artistic Director role at Sheffield in mid 2016 to the celebrated Chichester Festival Theatre so this will be his last Christmas production for them, he has left quite a legacy in his five years with them, and what a musical to end his Sheffield Christmas career on. Although I did see in the programme that he will be directing a brand new musical there before he leaves so I will have to see about getting over for that. The bar has been set high for next year's Christmas delight!
Posted by Alison at 09:53