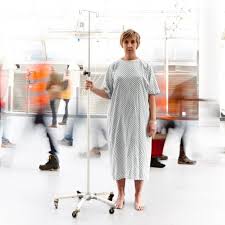 The Royal Exchange's production of Margaret Edson's Wit portrays the journey of Doctor Vivian Bearing, a spiky, clever and independent Doctor of Literature, as she is diagnosed with an aggressive ovarian cancer and becomes a research case for the medical doctors dealing with her case. It sounds bleak, and as Vivian points out at the start, the ending of her death is inevitable. Uncompromising and stark as it is though, it balances the harsh reality with wit and an examination of the motivations and drivers of the various characters on stage, whilst never shying away from the reality of facing a terminal illness.

Told in part narration and part portrayal of events, from diagnosis to eventual death it has a clever structure whose fast pace keeps the audience's attention throughout. 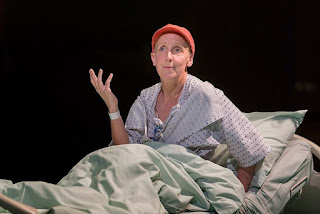 The play portrays the indignities of diagnosis and treatment with harsh and at times wince inducing reality, the fake and empty platitudes of doctors who see her as research rather than a person, the constant movement from one treatment or test to another, and the occasional moments of genuine human interaction and kindness which slow the pace, contrasting starkly with the bustle and impersonality of the medical factory.

Julie Hesmonhalgh is stunning in the central role of Professor, used to being the challenging one but faced with the ultimate challenge. As a researcher herself she is understanding of the motivations of the medical professionals, even enjoying the debate at times , and the needs to experiment and learn whilst knowing the outcome is unlikely to change. She is able to view it dispassionately initially,  but it's the glimpses of vulnerability and tenderness that break your heart.

The clever design and excellent performances and direction draw the audience totally into events on stage and the regular direct addressing of the audience by the Professor make you feel like an uncomfortable observer rather than a passive audience member.The sparse set is almost mesmerising  in its clinical emptiness, focussing you completely on the action on stage and echoing the bleakness of both the hospital and the prognosis.

I left this show with conflicting emotions, moved by the narrative, angry at some of the treatment that Vivian is subjected to, stimulated by the academic discussions, but tearful due to small moments of kindness where academic boundaries dissolve and human emotions, kindness and the frailty of life are highlighted. One of the best shows I have seen in quite some time.