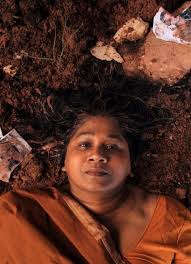 If you’ve read my blogs in the last year you’ll have seen that I have a special liking for theatre in non-theatre spaces, and also immersive theatre, where the audience becomes part of the performance in some way. So when I heard that an immersive theatre performance was to be staged in an empty office building in central Manchester, just across from Piccadilly station, I knew that it was something that I wanted to check out. I have to admit, I didn’t at that point pay an awful lot of attention to the subject matter, and didn’t read any reviews, as is often the case with my random theatre adventures, but this approach is not necessarily a disadvantage as I arrive at performances with no preconceptions of what I am about to experience, and it has led to me seeing some fantastic and diverse creations.

In fact, if you knew the key subject matter of this performance before arriving, I suppose it might put some people off, as it focuses on the impacts of civil war and its aftermath in Sri Lanka. You might think it would be too traumatic, or dry and worthy. However, Looking for Kool is a wonderfully balanced performance, told with a great warmth, centring on some very human and touching stories, yet never ignoring the tragedy and pain that touches successive generations in different ways. 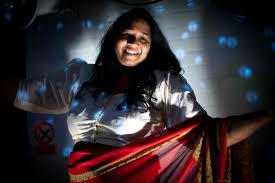 The piece starts with us being warmly greeted by Mrs U, who immediately breaks down the physical barriers between audience and performer, and we feel like welcome guests rather than detached observers. In fact, as guests we get to share what food she has, the ‘Kool’ of the title, as her tale begins. Mrs U has lived through the war and its ongoing impact, and wants to share with us her alternative to the detached tourist viewpoint more widely available. Whilst all around her high rise offices and luxury hotels are springing up for the incomers, Mrs U wishes to tell her journey, one told with a great deal of warmth and humour at times, but also containing heart-breaking tragedy and loss. Whilst most of the actions centres on this wonderful character, we also meet two members of her family, her nephew and her granddaughter. All the characters are finding different ways to make ‘the best’ of their situations, and whilst only Mrs U has directly witnessed the impacts of conflict, all have been impacted indirectly, and it is interesting to see the differing generational responses.

Looking for Kool is written by Rani Moorthy, founder of RasaTheatre, who also takes on all the roles. It is an incredibly impressive performance, each character is finely detailed and distinct, and the immediate bond she creates with the audience as Mrs U makes this a very special and moving experience.

The staging of the piece, in an unused office space in Piccadilly Place, is extremely clever. Whilst the space itself is just one large empty shell, the design has created a very intimate feeling with a number of different, simply designed but effective, ‘sets’ housing the stages of the narrative.

The piece was obviously very emotive for those in the audience that have Sri Lankan links, but it would be a pity if this was its main reach, as it certainly opened my eyes to world events that I am ashamed to say I had very little knowledge of (particularly as my sister in law has Sri Lankan heritage) and that I will find out more about. But at its heart it was a very human story, touching and warm, and, even with its tragic elements, I ended it feeling strangely lifted, as it had been such a privilege to share this lady’s world.
I had the pleasure of a brief chat with Rani Moorthy at the end of the performance and she is as warm and lovely as Mrs U, and should be very proud of this work which combines important themes with a huge heart.

Looking for Kool is playing at Piccadilly Place (literally a stone’s throw from Piccadilly station) until the 24th March and I would encourage people to invest an hour of their time to share Mrs U’s story. You won’t be disappointed, and you’ll even be fed!
Posted by Alison at 18:25