Mother Courage and Her Children, Library Theatre Company at the Lowry, 22/2/13 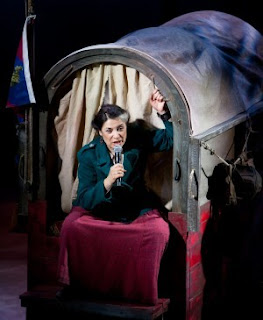 The sum total of my knowledge about Bertolt Brecht before seeing his play Mother Courage and her Children, the latest Library Theatre Company production at the Lowry, was that he was ‘important’. And my companion for this visit had been told that this play was considered to be one of the greatest anti-war plays of all time. I did wonder whether this would actually mean it was heavy going, but this production was lively, accessible, with a lot more humour than I was expecting, whilst still containing some very strong messages.

The play was written in 1939 as a warning against wartime profiteering and its central message still holds true today. It is set in the in the Thirty Years War of 1618-1648 in Germany and Poland, and follows one woman’s journey, the Mother Courage of the title, a trader who follows the troops, seeking every opportunity to turn a profit. She travels with her three children products of varied (and in one case uncertain!) relationships, and is a devoted and fiercely protective mother. However, during the course of the play she makes choices, driven by her desire to maximise the trading opportunities that war brings, that, whilst she believes they are for the right reasons, have tragic consequences for each of her children. As the play progresses, and her circumstances become increasingly challenging, she remains determined to survive and prosper, even changing allegiances where this would aid her cause. However, ultimately we see the tragedy of her life and the consequences of her actions divorce her from the reality of her situation, and gradually surviving and blindly following her path takes over from living.

The Library Theatre Company and director Chris Honer have done an excellent job in bringing this epic tale to the stage. The tone is set from the outset, when Courage and her family enter the stage, with the matriarch perched on their wagon singing into a handheld microphone. The action is interspersed throughout with songs from various characters, many of them apocryphal tales that echo events on stage. 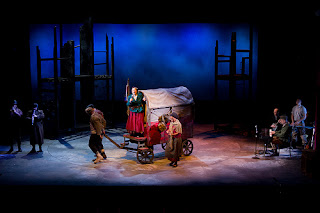 The sparse but versatile set, incorporating a revolve that is used to good effect to illustrate the onward journey of the dwindling family, wonderful costume design and washed out lighting, combine to create a very clever effect on the stage, at times it’s almost like seeing a painting come to life on stage, which fits with the epic nature of the text.

There were some timing issues on the night that I saw the play, but this was a first preview and I think a few minutes will be shaved off the three hour running time as the play progresses. And I did find the use of electronic captions to each side of the stage preceding scenes to be a little distracting as it took your eye away from the action on the stage. Although the use of the captions did highlight the bleak inevitability of the events as they unfold. 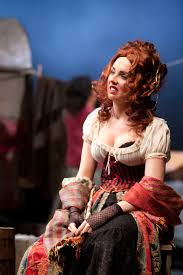 The production requires much from its cast who in the main deliver well. Many take on multiple roles, and also provide musical accompaniment throughout. Natalie Grady, as the prostitute Yvette, gives a particularly impressive performance, portraying the character at two contrasting stages of her life so well you have to do a double take to check it’s the same person. But the stand out performance is Eve Polycarpou, who gives an absolutely breath-taking performance as the indomitable Courage. On stage for virtually the full length of the play, her portrayal is totally engaging and very powerful, with a nice balance between the comedy, and the complexities of her character and motivation.

All in all, the staging of this epic play, in such an accomplished and accessible way, is an impressive achievement from the Library Theatre Company, and makes the most of the advantages that their temporary lodgings at the Lowry allow.
Posted by Alison at 10:28