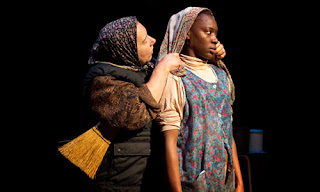 More often than not I turn up to see a play knowing very little, if anything, about it. I avoid reviews until after I have experienced it, as I don’t want anyone else’s opinions to cloud mine, and I want to be surprised. This tactic almost backfired when seeing ‘Cannibals’ by Rory Mullarkey, a curious creature of a play that definitely challenged me and had me completely befuddled at times.

I'm going to be completely honest, which might highlight my own failings, I spent most of the of this production not really getting it, having made certain assumptions about its setting that turned out to be wide of the mark! It had some extremely striking images, and some amazing performances, but, at times I felt like I was watching one of those experimental theatre productions that tries to blind you with its own cleverness but never really adds up to the sum of its parts. In fact at times, I remember being quite annoyed as the play wasn't really hanging together for me, and I admit I was making sneaky glances at my watch to see how much of the 1 hour 45 mins run time had passed.

And then, actually just as I left the building after the show had ended, I had my 'oh, I see' moment! Once the light finally dawned on my confused brain, thinking back over the performance and the scenes it suddenly all made sense  and I think I understood what the playwright was intending. And it is very, very clever when you see it in that light. In fact, I keep thinking about it now, and I wonder, if I had been quicker on the uptake (or read the programme pre play) and therefore viewed the play in the  light of that knowledge, how my response would have been different. 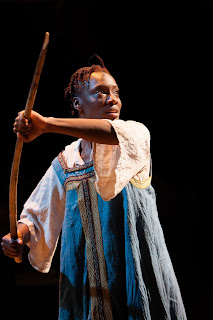 The play deals with some very dark and disturbing themes from the outset, in fact there are two moments that did elicit the odd shriek from the audience! People are struggling to survive in against the background of poverty, hunger and desperation in a land destroyed by war. The need for survival is uppermost driving people to cruel and savage acts. However, there are moments of beauty and comedy scattered through the play.

The central character of Lizaveta, has experienced terrible trauma, and Ony Uhiara gives an impressive performance in the role, on the stage for the whole time, with her terror and nervous energy ever present. There is one extremely powerful scene where she relives her life and her suffering to harsh effect, which  was extremely touching and well judged.  But the standout performance for me was Ricky Champ as Joseph the fool, a wonderful character, touchingly portrayed in a nicely balanced and skilful way. I’d love to see more from Champ and I hope the Royal Exchange lures him back soon. 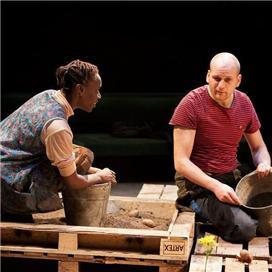 As mentioned before, the staging is striking, delivering a series of memorable images, the direction incorporates some more stylistic touches to good effect. There were a couple of directorial / design choices that didn't work for me, such as the portrayal of flight of one of the characters without them leaving the performance space by an awful lot of running on the spot or in circles, that verged on the comical rather than the intended portrayal of the terror of the character. And there was a fire effect used at the start of the performance that took a long time to set, broke the pace of the action, and didn't really pay off in terms of drama. But these minor points were more than made up for by the whole.

There is a fabulous section towards the end of the play that will ring bells with anyone familiar with the day to day life and characters of Manchester city centre (including the rubbish human statue often seen in St Anne’s Square), which made good use of the ensemble cast.

All in all it was a strange experience for me as an audience member. Definitely challenging and confronting, frustrating at times, but in retrospect, and now my brain has caught up with the conceit of the play, actually very effective and thought provoking.
Posted by Alison at 10:05