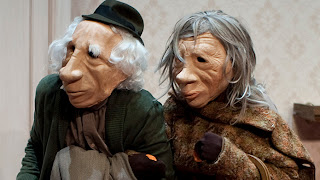 What a wonderful night at the theatre this show turned out to be. The exquisite Andre & Dorine, presented by the Spanish theatre company Kulunka, was a masked piece about an elderly married couple, at the stage in their lives where familiarity has led to niggling annoyances with one another and competition for their son’s attention. But the routine of their existence is shattered by the cruel blow of Alzheimer’s, and the narrative moves between the disease’s increasing grip on Dorine, and flashbacks of their loving relationship from first date to married life and the creation of a family. 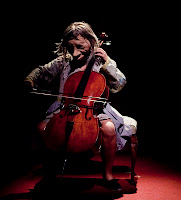 It’s the first time I had seen mask theatre, and I suspect I have been lucky enough to see it at its best already. The performances were incredibly skilful, conveying every nuance and emotion perfectly. The tiniest detail was brilliantly observed, and portrayed through subtle and finely judged performances from the cast of three – Jose Dault, Garbine Insausti and Edu Carcamo.

The use of masks allowed seamless changes between scenes, in particular a nice use of flashbacks where the older Andre remembers his younger days and the blossoming relationship with the feisty Dorine. The detail of the performances was so fine that, although each performer took on multiple characters, each was perfectly realised and completely individual. There was even a section that included some fantastic puppet work as the son’s early years were shown. 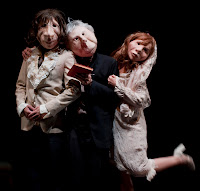 The story itself was well constructed and very moving. Whilst the progression of the illness was absolutely heart-breaking, and told with brutal realism, humour was ever present, particularly in the flashback scenes, which in a way heightened the emotion of the piece overall. Hauntingly beautiful music added an additional dimension to the piece, and the masks and set were fabulous.

Either there were a lot of people with colds in the audience at the Lowry Studio that night, as there was a lot of sniffling and wiping of eyes going on, or most people were as moved as I was by this beautiful, moving and uplifting creation. Rather than handing out leaflets as we left, maybe the ushers should have been handing out tissues as there was more than one person shuffling out in tears! I was quite glad it was raining as I left the theatre as it disguised my tear stained face.

I really did think this performance was one of the most wonderful pieces of theatre I have seen in a long time, and it got a fabulous, and completely deserved, reaction from the Studio audience. I would love to see it again, it was so beautifully realised both in construction and performance. Simply gorgeous.
Posted by Alison at 11:11