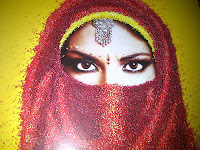 After the stressful run up to Christmas, and the inevitable post-Christmas dip, a trip to the Lowry to see the much lauded Arabian Nights was in order. A last minute booking saw me, my two young companions G (9) and R (6) and their dad (well we needed one responsible adult) travel over to Salford to be hopefully transported to more exotic lands.

When I checked the running time before the show, and found it was almost two and a half hours, I did wonder how the younger guests would deal with it, and when we took our seats, right up in the top tier of the theatre, peering down at the stage below, there were a few initial moans (I internalised mine!) about how far we were going to be from the action and whether we would be able to see, but I needn’t have worried as this entrancing  tale had all of us completely caught up in it from start to finish, and clever design and staging meant that every member of the audience felt involved as the tales wove their magic.

A King is wronged by his wife, and after having her put to death, declares that no lady can be trusted, and so in future he will only keep each wife for one night, after which she will be slain. One young girl, Shaharazad, an expert storyteller, requests to be his bride, and each night spins magical stories for the King, postponing her death sentence and gradually teaching him important lessons about life, ultimately leading to a joyous conclusion.

The atmosphere conjured from the start for this production is wonderful. The programme tells me that the aim was to create the feeling of traditional storytelling, with tales being passed on by market traders who travelled across the Middle East, Northern Africa and India, and the ‘in the round’ staging and wonderful set design, coupled with live music, certainly adds to this feeling of being gathered round after dark to hear the tales unfold. There is even the faint smell of incense wafting through the space and as the lighting dims, and the lanterns suspended from the ceiling glow, from my lofty seat I almost feel I am peering down from a secret hiding place in the palace, eavesdropping on the stories.

The cast are fantastic, nine actors portraying over one hundred roles seamlessly, and the use of minimal props leads to imaginative and clever touches such as the cave / thieves transition in Ali Baba and the forty thieves, and the scene stealing singing tree! I think particular mention should go to Tachia Newall, who impressed me very much in Manchester Lines earlier this year. Here his energy, effortless physicality and audience engagement are used to great effect, the highlight for me being his wonderful portrayals of both the beggar and the man bewitched into the form of a dog.

There are some lovely and comedic touches in the script, which, as well as reflecting the multicultural origins of the tales, give a nod to the multiculturalism of the UK, and the home place of the Library Theatre, and they even manage to slip in a bit of audience call and answer as a nod to the seasonal panto tradition.

As for my initial worries about the staying power of younger members of our party, these were completely unfounded as they were enthralled throughout and declared the show a resounding success (especially the fart joke!). Not a single whinge was heard, even the sweets were forgotten temporarily, and the lofty viewpoint was declared a big success in the scarier moments (thieves can’t get us up here!). As for this somewhat older audience member, well I too was completely entranced and for a short while felt like a kid again. Well done all, a perfect non panto treat for all ages.