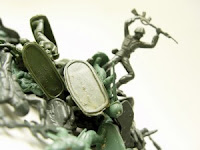 This production was another that was part of the InOnTheAct festival that has been taking place in Salford over the last couple of months. The festival has aimed to break the barriers between the audience and the performance, and has seen such diverse offerings as the intimacy of You OnceSaid Yes, and the playful eccentricity of Borderline Vultures. The Situation Room, presented by Oscar Mike Theatre, gives us yet another take on audience participation.

We arrive at a ‘secret Salford location’ (aka a wet and windy street corner in Salford just near Morrisons - we must have looked like the least menacing group of hoodies ever) and are ushered into a unused building where we are greeted by the actors and quickly and cleverly divided into two groups. The physical separation immediately introduces the sense of division and potential rivalry, even though at this stage we are not really sure what is about to unfold.

From there we are moved into the main performance space, a sparse room where the two groups sit on opposite sides of the performance area. The lighting is dark and atmospheric, and the nervous giggles of the audience show how effectively the tension has already been built.

It is explained that we are two rival nations in a military situation in the 1960s, and we meet our diplomats and advisors, Benjamin R Stokely (Simon Carroll-Jones), and Andrey Sergeyevich Budka (Robert Macpherson). Over the course of the evening we witness the development of the situation through their eyes, and the audience are cleverly involved in varying ways in the decision making that will have direct impacts on events and lives.
The production is really well constructed, it highlights the way the same events can be seen from different viewpoints, builds the tension effectively whilst combining it with elements of humour that draw the audience into the ‘game’, and highlights the terrible and complex choices that are made in the name of war, making you examine your own responses to those decisions.

The success of this production owes a lot to the cast, who both give well-judged and skilful performances. There is a point, towards the latter part of the production, where there is a dramatic change of mood which contrasts the ‘games’ that have been played with the realities of armed conflict. It’s a shift that requires a great deal of agility by the performers and is fantastically delivered. As an audience member it had a powerful effect on me, it left me feeling quite traumatised and really made me think. It’s a scene that will stay with me for a very long time.

All in all a cleverly crafted production, in a very atmospheric location complimented perfectly by the use of sound , and excellently delivered by the cast – a memorable experience on many levels.
Posted by Alison at 15:06